Daytona International Speedway, Sunday 29 January 2017 – No. 10 Konica Minolta Cadillac Dpi-V.R won the 55th edition of the Rolex 24 At DAYTONA this afternoon, completing 659 laps of the famous Daytona International Speedway. Ricky Taylor took the chequered flag first after a testing 24 hours ensuring that he and his team mates, Jordan Taylor, Max Angelelli and NASCAR legend, Jeff Gordon, were awarded the Rolex 24 At DAYTONA trophy and a specially engraved Rolex Oyster Perpetual Cosmograph Daytona. Captivating, spectacular and extremely demanding, the ‘Rolex 24’ is one of few motor sport events in the world to test the ultimate limits of man and machine, all against the clock.

Hurley Haywood, five-time winner of the Rolex 24 At DAYTONA, waved the green flag at 14:30 local time on Saturday, officially marking the start of America’s famous race. The Cadillac Prototype trio of the #31 Whelen Engineering Racing, #10 and #5 Mustang Sampling Racing set the pace from the beginning before early favourite, #31, suffered steering issues in the eighth hour. As darkness fell the rain began to fall and a bitter cold set in, making the track treacherous and demanding the utmost concentration from the teams. 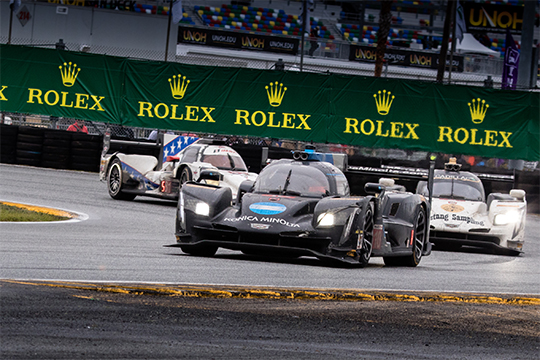 In the early hours of Sunday morning with the extreme conditions refusing to let up, the field experienced two extended hour-long safety car periods, underlining the true attritional nature of this test of endurance. The cars competing this year are the most technologically advanced of this era; every lap is a learning experience for teams who are pushed to the limits. With three hours remaining, and finally a dry track, the Prototype (P) and GT Le Mans (GTLM) winners were far from decided with multiple cars on the lead lap. Counting down the final minutes on the Rolex clock, the race went down to the wire with a thrilling battle between the leading Cadillacs; ultimately the #10 took the lead from the #5 with a legal and robust move into turn 1 with only moments to go. Throughout the 24 hours the #10 successfully answered everything its rivals, nature and time could test it with and deservingly took the chequered flag by only 0.671 seconds from its sister car. 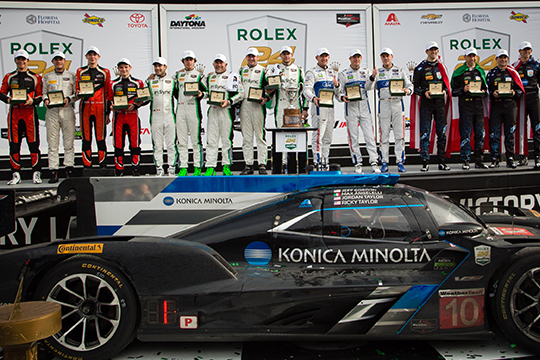 Forty-one of the 55 race starters made it to the finish, further exemplifying the punishing nature of this two-lap test of the clock. The 3.56-mile circuit demands a unique combination of resilience, skill and awareness, as well as reliability and performance, proving there are two types of winners at the Rolex 24 At DAYTONA: those who win and those who cross the finish line after 24 hours.