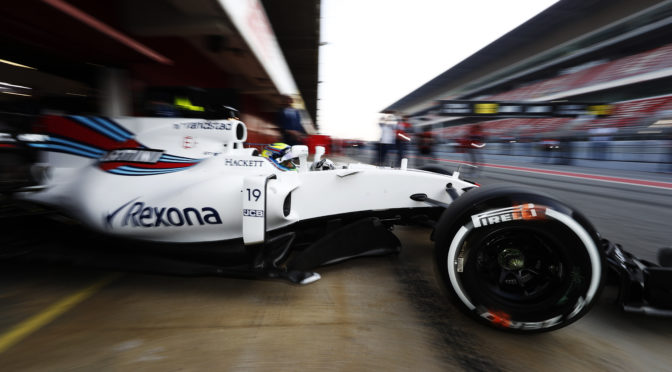 The Williams Mercedes FW40 broke cover at the Circuit de Barcelona-Catalunya in Spain today as the teams gathered for the first of eight preseason test days.

To mark the 40th anniversary of Williams competing at the pinnacle of motor racing, the team’s 2017 chassis is named the FW40, following on from last season’s FW38.

Commenting ahead of the 2017 season Claire Williams, Deputy Team Principal, said: “This season is one synonymous with change. Not only are we competing under a new set of regulations, but for the first time since 2013 our driver line-up features a new face in the form of 2016 FIA European Formula 3 Champion, Lance Stroll. He takes on his rookie year alongside Felipe Massa, one of the most experienced drivers on the grid.

“After finishing fifth in the Constructors’ Championship in 2016, it will be a challenging year – especially as we enter this new era of racing. However, the team have been working extremely hard over the winter to deliver the maximum performance out of the car going into a brand new season.

“We hope that everyone’s hard work over the winter will have paid off, but it’s now a waiting game to see where we stand in relation to our rivals. We are ready for 2017. With changes up and down the grid, a new era is upon us and we will keep pushing to get Williams back to where it should be.”

“There have been a lot of changes at Grove over the winter that could have been considerably distracting for all involved in the delivery of the FW40, but everyone has been incredibly professional, rolling up their sleeves and getting on with what’s important. Frank, myself and the Board are extremely grateful to everyone at the factory for all their efforts over the winter. I hope they, our partners and our fans are rewarded with a more competitive year on track this season.”

After coming out of retirement to compete in a fourth successive season with Williams, Felipe Massa said: “I can’t believe we’re back racing again already. It’s amazing to have another year with the team – after my very short retirement! I always knew I wouldn’t stop racing and I was delighted to get the opportunity to return with Williams, it’s the one team I feel a lot of love for.

“I have a new team mate this year in Lance and I’m confident he will use his youth to his advantage and learn quickly. Having raced in F1 for many years I will be happy to share my experience with him and I know we will work well together which will only be a good thing for the team as a whole.”

“I’m looking forward to racing the FW40. 40 years in racing is a significant and special milestone for Williams so I really hope we can make this year a great one. Everything is reset with the new rules this year so it’s important we are ready for anything.”

Lance Stroll, who will be competing in his debut season in Formula One, said: “I can’t wait for the season to start! It feels like a long time coming. However, I feel like I’m as prepared as I can be – a lot of people have put in a lot of hard work to help get me to this point and I’m very grateful for that. I hope that it’s a good first year for me but I will be taking it race by race. There is a lot of pressure on rookies but I have a great team around me and I just need to maintain focus and deliver. Kicking the season off with testing will be a good first step but Melbourne will be the real test for everyone.”

The FW40 will take to the track for the first time on Monday 27th February for eight days of testing, concluding on 10th March. The season officially begins at the first race in Melbourne, Australia, on 26th March.