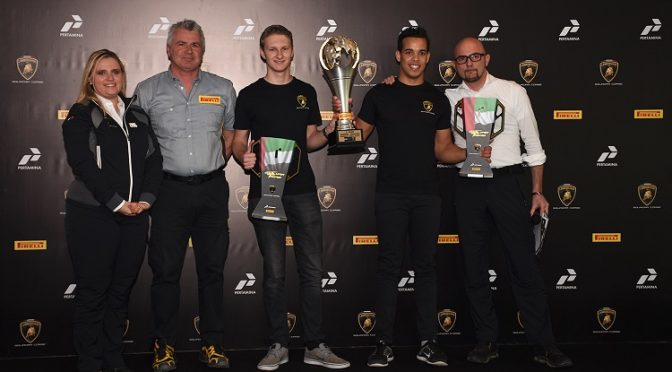 The Dubai Autodrome might be a relatively unfamiliar circuit for both Axcil Jeffries and Rik Breukers, but the GDL Racing drivers mastered the track in short time behind the wheel of the exotic Lamborghini Huracán GT3. For the second round in the row, the championship leaders were flawless on their way to winning the weekend and claiming the overall title in the first season of the series.

Dutchman Breukers put the team on pole position with a best lap time of 1:57.714 and in the next two races Breukers and Jeffries fought off early challengers to break free and take comfortable victories, winning by 41.57 seconds in Race One and 20.4 seconds in Race Two, wrapping up overall and Pro Class triumphs.

The wins also secured the Lamborghini Super Trofeo Winter Series Middle East Championship for Breukers and Jeffries, making them the first winners of the inaugural series.

After receiving their championship trophies Rik Breukers of GDL Racing said, “For us it was really a great season. We put in a lot of hard work, especially together with our engineers in the final, and of course the GDL Team, everyone was working very hard, so I’m really glad it paid off.”

Young German sensation Carrie Schreiner and Aussie ace Richard Goddard spent two races trying to chase down the GDL Racing outfit, but on both attempts they had to settle for second place silverware. The German duo of Paul Scheuschner and Hendrik Still of Konrad Motorsport claimed third place in Race One while Jack Bartholomew and Devon Modell of FFF Racing Team by ACM collected third in Race Two.

Andrew Haryanto, of yet another GDL Racing car, racked up an AM Class win in Race One but failed to finish Race Two due to a puncture, leaving his rivals Marco Antonelli and Davide Roda of Antonelli Motorsport to earn a class victory in Race Two. Haryanto wasn’t too disappointed however, as he still did enough to take home the AM Class title.