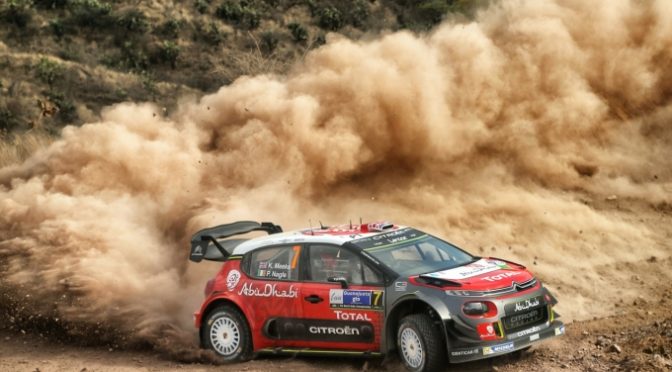 Despite being shorn of half of the planned stages, day two of Rally Mexico nonetheless served up plenty of twists and turns. Keeping out of trouble, Kris Meeke and Paul Nagle ended the rally’s first full leg in the overall lead. In the second Citroën C3 WRC, Stéphane Lefebvre and Gabin Moreau moved up to sixth place.

– Held up by a road traffic accident unrelated to the rally, the convoy of trucks transporting the race cars from Mexico City to León remained stuck on the road for several hours overnight. The organisers were therefore forced to cancel SS2 and SS3.

– In the middle of the afternoon, the competitors were finally able to attack the gravel stages. The leg began with the famous El Chocolate speed test, the rally’s longest stage at 54.9km. Making the most of his tyre choice – which consisted of a mix of soft and hard compound Michelin LTX Force tyres – and his road position, Kris Meeke produced a flawless performance to record his first stage win in the Citroën C3 WRC.

– Despite losing a few seconds when he stalled on Las Minas (SS5), the Briton held onto top spot in the overall standings, leading Sébastien Ogier by around fifteen seconds.

– Applying the instructions of the team, Stéphane Lefebvre adopted a pace that would enable him to build up his experience gradually. Eighth on SS4 and SS5, he moved up to the same position in the overall standings.

– The day concluded with three super special stages. After wowing the crowds gathered in the former mining city of Guanajuato, the crews then competed in head-to-head heats over two runs on the León Autodrome.

– At the end of this second leg, Kris Meeke remained first overall, having taken his lead past the twenty second mark. Meanwhile, Stéphane Lefebvre gained another two places to end the day in sixth overall.

Kris Meeke
“Everything went very well today. We clearly had a good road position, but we had to make the most of it. I didn’t push too hard, because winning isn’t my main target for the weekend. My only regret was the minor mistake I made on SS5, which cost us about eight or nine seconds. But it’s good to be running well after a pretty tough start to the season! I’ll be looking keep up the same pace tomorrow.”