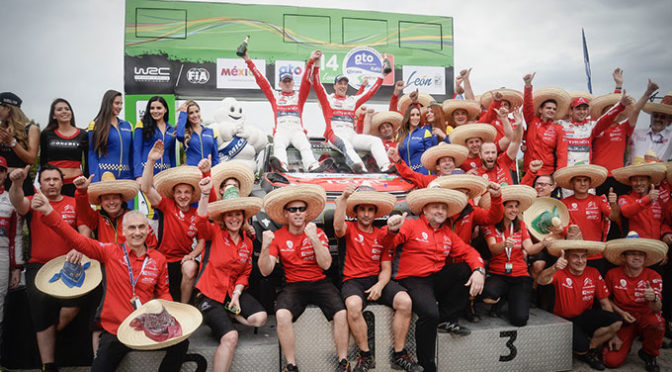 A MAIDEN WIN AND HIGH HOPES

Kris Meeke and Paul Nagle emerged victorious in Mexico to claim the Citroën C3 WRC’s first win. Secured on gravel – the surface on which the majority of the World Championship is contested – this result confirms the potential of the car developed by Yves Matton’s troops. The season is now really up and running for Citroën Total Abu Dhabi WRT, which will be entering three cars at the forthcoming Tour de Corse.

THE STORY OF THE RACE: BREATHTAKING RIGHT TO THE FINISH!

From the very outset, it seemed that this year’s Rally Mexico would be like no other. To begin with, the organisers managed to pull off something of a feat in holding a super special stage right in the middle of Mexico City, on the famous Zócalo square. Despite the rain, this new experience gave fans in the huge city an exclusive opportunity to witness the WRCs up close.

Unfortunately, the journey back to the service park in León, 400km from the capital, ended in disarray. A road traffic accident unrelated to the rally led to the road being closed, leaving the convoy transporting the cars stranded for several hours overnight. Their late arrival back in León resulted in the first two stages on Friday morning being cancelled.

The race therefore only really began with the rally’s 55km-long marathon stage, El Chocolate. Making the most of his tyre choice and a good starting position, Kris Meeke grabbed the stage win to move into the overall lead. The Briton also won one of the evening’s super special stages to end the first full day as leader, having already established a healthy 20.9s lead over Sébastien Ogier.

Meanwhile, in the other Citroën C3 WRC, Stéphane Lefebvre also made a good start to the race. He ended the day sixth overall, following the plan drawn up for him by the team to the letter on his first appearance at Rally Mexico in a WRC. However, the young Frenchman was then forced to retire in somewhat unfortunate circumstances on day three. Following a minor error, the no.8 C3 ended up stuck on a slope just off the road on a corner on SS10. The car was undamaged in the incident, so he was able to rejoin the next day under Rally2 rules.

Meanwhile, Kris Meeke continued his dominant display, tying for first place on El Brinco (SS11) and setting the fastest aggregate time over the morning’s stages. On the second pass, he claimed a stage win on Lajas de Oro (SS13) and extended his lead over Sébastien Ogier to 30.9s.

On Sunday, there “only” remained two stages to complete in order to see out this maiden win for the Citroën C3 WRC. On El Calera, the Citroën Total Abu Dhabi WRT drivers scored an impressive team result, with Meeke taking the stage win and Lefebvre finishing third.
On the Derramadero Power Stage, Kris Meeke looked like he was on course to seal the victory… when he went off the road just a few corners from the finishing line! The Northern Irishman ran wide after a big compression, through the hedge and into the middle of spectator car park! He nonetheless stayed calm, managed to find a way back onto the road within a few seconds and made it across the finishing line to win the rally by 13.8s!

After such an incredibly dramatic, stressful finish to the race, there were scenes of joy and excitement in the Citroën Racing team and they celebrated with Meeke and Nagle at a very noisy, passionate podium ceremony in León.