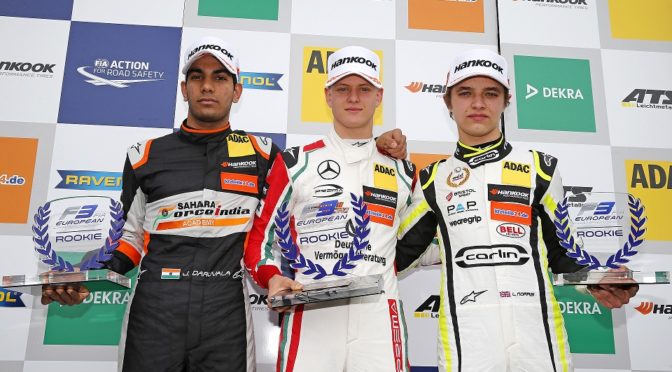 British driver Callum Ilott started the race from pole position and took the lead at the start. Alongside him, Lando Norris had a poorer getaway from the damp side of the track and lost some positions. Ilott, however, wasn’t able to hold on to the lead for long. On the opening lap already, Joel Eriksson made an attack and went past the Prema driver. The Swede, the winner of last year’s FIA Formula 3 European Championship rookie title, immediately pulled clear from his rivals and went on to secure an undisputed victory.

Ilott and Hughes also safely brought home their second and third places. Maximilian Günther (Prema Powerteam), on the other hand, had to defend his fourth place from Jake Dennis at several stages during the race, which the runner-up from last year’s championship managed to do. Mick Schumacher took the flag in sixth place overall as the best-placed rookie driver. The son of Formula 1 record world champion Michael Schumacher came out on top in the duel with Lando Norris and, in his second FIA Formula 3 European Championship race outing, emerged as the best rookie for the first time. In the closing stages of the race, Norris also lost seventh place to Guanyu Zhou (Prema Powerteam) and then, Jehan Daruvala (Carlin) managed to overtake the race winner from the previous day as well. After 19 laps, Harrison Newey (Van Amersfoort Racing) was classified tenth.

Joel Eriksson (Motopark): “My start was good, but I was also fortunate to be starting from the dry side of the track. Yesterday, I didn’t want to take too many risks and just score points. Today, however, my plan was to end up further at the front. As I was unable to overtake Callum at the start, I had to opt for a different strategy. I had a good exit of turn four and thus I was able to overtake him in turn six, even though the move was close. My car was very good; I reckon I was the fastest driver on track, especially during the opening part of the race. I used this advantage to pull a gap straight away and then hold on to it until the end. This victory is great, also as it is my goal to win the title this year. That, however, will not be easy as the field is stronger than last year.”

Callum Ilott (Prema Powerteam): “Being on the podium on home soil is always nice. At the start of the race, Joel was simply faster, but I was also having trouble in getting my tyres to the right temperature. After the first two laps, things were getting better, but by that time, Joel was gone. After my retirement yesterday, these points for second place are important.”

Jake Hughes (Hitech Grand Prix): “We are having problems this weekend, particularly in the fast sections. In the race, my left front tyre degraded badly, preventing me to keep up with Joel and Callum in front of me. On the first few laps, I also had to defend my position from Maximilian Günther, so that the gap to the front runners got bigger. Generally, a podium finish in the home race both for myself and for the team is nice, of course, we can now build on that.”