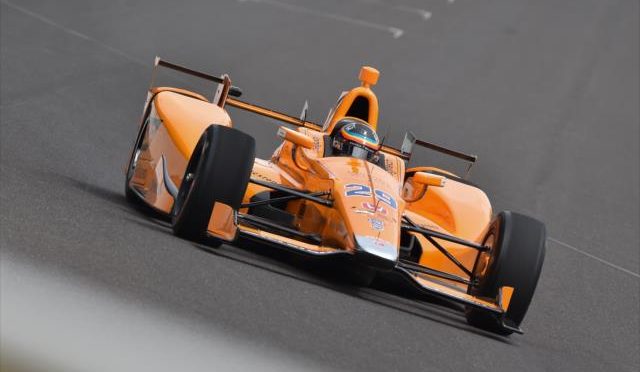 “It was fun,” Alonso said after making quick work of the three phases of ROP in just 51 laps in his No. 29 McLaren-Honda-Andretti car. “At this moment, everything looks good. Now it’s time to start the real thing.”

Practice for the Indianapolis 500 begins May 15 with qualifying on May 20-21, so the 35-year-old Spaniard has a lot to learn in a short time. He’s still had to juggle F1 commitments, which has meant an overabundance of travel. Alonso was unable to start Sunday’s Russian Grand Prix due to engine issues and will compete in the Spanish Grand Prix next week.

Alonso ranks sixth on F1’s all-time win list with 32 victories and celebrated world championships in 2005 and 2006, but hasn’t won a race since 2013 and his interest in enhancing his racing resume has brought him to Indianapolis Motor Speedway.

A day after preparing in a racing simulator, Alonso said his confidence grew with each passing lap. By day’s end, he had completed 110 laps with a top speed of 222.548 mph.

“I think it’s a good way to start, to build speed,” he said. “It was difficult at (the) beginning to reach the minimum speed. The next stages felt good, not because of the speed but because of the laps. You’re able to fine-tune the lines; upshift, downshift, which gears to use in the corner.

“The simulator is quite realistic. You have the first impression of how it’s going to be. But the real car is a unique feeling. When you have to go flat out in the corner, it’s not the same in the simulator as in the real car.”

Andretti Autosport CEO Michael Andretti, who will field six cars in the race including defending champion Alexander Rossi, liked what he saw from Alonso’s initial experience.

“He gets it,” Andretti said. “He’s one of the best in the world and you can see why. He had a little bit of understeer in that run and he adjusted his line because of the understeer. He’s the real deal. I think he’s going to be really strong this month.”

Three generations of Andretti racers – Mario, Michael and Marco – as well as Rossi and 2003 Indy 500 winner Gil de Ferran were among those giving Alonso advice. Mario won the 1969 Indy 500, Michael has celebrated four Indy 500 victories as an owner in addition to leading the most laps (431) without winning as a driver and Marco was a rookie runner-up in 2006 and is in his 12th season as a Verizon IndyCar Series regular.

“The team has been amazingly helpful,” Alonso said. “Running alone is quite OK. We’ll see in the next weeks. So far a good experience. Now is the real deal.”

Marco Andretti said cooler track conditions, with ambient temperatures in the low 50s, combined with Alonso being the only driver on track provided an ideal setting for the initiation. Alonso kept churning out laps amid a threat of afternoon showers as darker clouds drifted over the speedway.

“With this level of downforce, this is like race downforce, when there’s no traffic and you’re by yourself, it’s just stuck,” Marco Andretti said. “The front and rear are stuck right now, which is what you want for the first run.”
And what of sorting out the input from so many voices?

“He’ll have to learn by fire from a lot of it,” Marco said. “But he’s asking the right questions.