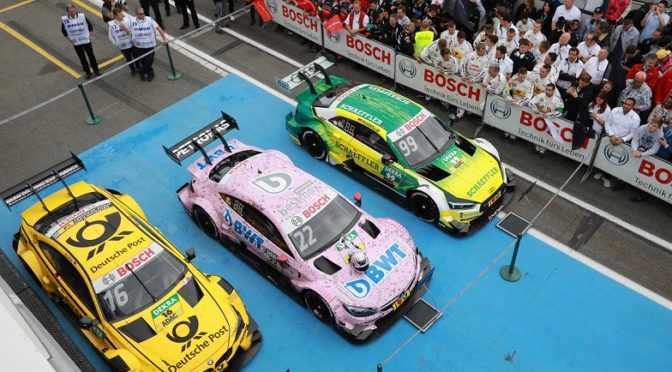 DTM fans got to see a high-quality and thrilling season opener at the Hockenheimring Baden-Württemberg, with Lucas Auer as the buoyant winner. Having started from pole position into the first of this season’s 18 races, the Austrian Mercedes-AMG driver was able to defend his position until the chequered flag was out and thus was first across the finish line. In a race marked by numerous overtaking manoeuvres, duels and different strategies, Timo Glock (BMW) came home second after 36 laps. Mike Rockenfeller (Audi), who only had started from 16th place on the grid, took the third and final podium slot.

For Auer, the way to his second DTM race win was anything but a walk in the park. “The race was incredible, I am overjoyed,” Auer commented after the race. “We had a strategy, but the execution wasn’t quite easy without the radio communication. As a driver, you are out there on your own. I knew that I would stand a chance when I would manage to hold off two attacks by Glock.” The 22-year-old made use of this chance and secured the second race win of his DTM career.

The season-opening DTM race at Hockenheim has shown the positive effect of the rule changes on the racing action: the enhanced engine performance, the revised aerodynamics, the new slick tyres, the ban on tyre warmers and the pit stop rules are suitable for the DTM and ensure entertaining racing action throughout. While Auer and Glock started the first race of the season from the first two rows on the grid, both Rockenfeller and fifth-placed Mattias Ekström (Audi) made up more than ten positions in the race, and they did so with different strategies. Rockenfeller already came in for his tyre change at a very early stage, on lap nine, while his fellow Audi driver Ekström was the penultimate driver to do so, on lap 25. Both strategies were successful.

After the first race, Lucas Auer is leading the DTM drivers’ standings with the maximum score of 28 points from Timo Glock (18 points) and Mike Rockenfeller (15 points). Action already continues tomorrow, Sunday, with second qualifying from 12.20 hrs and the second race from 15.15 hrs.