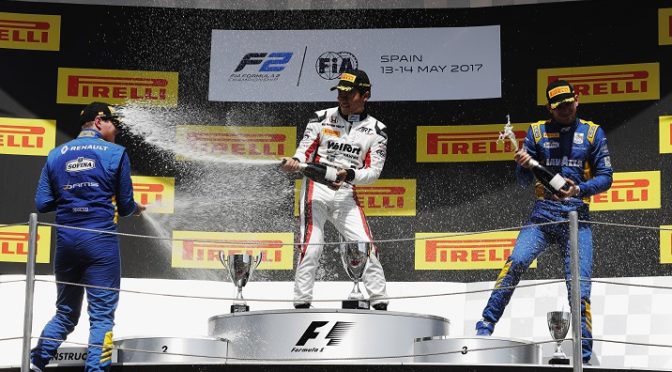 MATSUSHITA SPRINTS TO VICTORY IN BARCELONA

Nobuharu Matsushita put himself in the driver’s seat to collect victory in this morning’s Sprint Race at the Circuit de Catalunya-Barcelona with a solid, mature drive to P2 in the opening stages before a mistake by race leader Nicholas Latifi gave the McLaren development driver a clean run through for his first win since last year’s sprint race in Monaco, ahead of DAMS teammates Oliver Rowland and Latifi.

The race opened under clear and warm conditions, and when the lights went out polesitter Artem Markelov bogged down, with P3 starter Latifi making an incredible start to easily lead front row starter Gustav Malja, Matsushita, Luca Ghiotto, Alexander Albon, Rowland, Jordan King and Charles Leclerc past the fuming Russian and into turn one. A few corners later Nyck De Vries and Antonio Fuoco came together and spun in unison, prompting the safety car to make an appearance.

Latifi easily controlled the lap 2 restart before setting off down the road, putting himself safely out of DRS range in the process, while Leclerc started his move up the timesheets with a clean run through King at turn one, with Markelov following in his wake. The Monegasque driver was soon recommencing battle with former GP3 rival Albon, forcing both men forward: Ghiotto was quickly dispatched by the pair, while ahead of them Matsushita and Rowland claimed Malja’s scalp on lap 14 as they put themselves on the podium.

With 6 laps to go Leclerc’s constant pressure finally paid off: Albon’s tyres were shot and he was simply unable to defend anymore when the Ferrari Academy man blasted past at turn one and into the distance, passing Malja a lap later. Out in front Latifi had built a 3.5 second lead, but a moment’s distraction when his mirror detached saw the Canadian run wide, with Matsushita needing no further invitation to blast past and teammate Rowland carefully ensuring the pair didn’t come together as he followed the Japanese driver.

Matsushita flew away, building a 3.3 second lead over Rowland by the time the chequered flag dropped for him, with a gutted Latifi at least bringing home another podium for the team behind the Briton. Leclerc brought home more points for his title fight in P4 ahead of King, who had saved his tyres and sliced through his rivals on the closing laps for 5th ahead of Malja, who just denied Ghiotto on the line, with Albon limping home with the final point for P8.

Leclerc leads the way in the Drivers’ Championship after Round 2 on 73 points, ahead of Rowland on 47, Ghiotto on 38, Markelov on 34, Matsushita on 31 and Latifi on 28 points, while PREMA Racing and DAMS share the honours at the top of the Teams’ Championship on 75 points ahead of RUSSIAN TIME on 72, ART Grand Prix on 52 and MP Motorsport on 26 points as the grid turns its attention to the next round of the championship, in Monaco on 25-27 May.