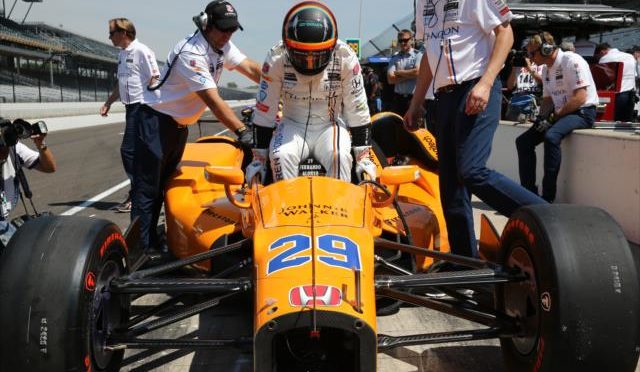 FERNANDO AT THE INDIANAPOLIS 500 PRACTICE

Fernando Alonso, the two-time Formula One champion making his Verizon IndyCar Series and oval track debut at this year’s Indianapolis 500, completed his rookie orientation in a private test at Indianapolis Motor Speedway on May 3. The 35-year-old Spaniard, a teammate to Marco Andretti in one of six Andretti Autosport entries, began the methodical process of getting up to speed by completing 55 laps in the No. 29 McLaren-Honda-Andretti Honda with a best circuit of 223.025 mph.

FERNANDO ALONSO (No. 29 McLaren-Honda-Andretti Honda):  “I was a little bit concerned (heading in) about the conditions, about the temperature, as it was much hotter today than at the test we did here on May 3rd. But no, the car felt as good as it did at the test, and I was able to make some setup changes without losing the confidence in the car. Everything went very smooth. The last half an hour maybe we had some issues with the rear suspension, and we could not complete the program that we had planned to run a little bit in traffic at the end of the day, so we missed that part, but overall it was an amazing day. I’m happier than the first day with the car because I was able to feel some of the setup changes that we were planning in the morning.  We did not do much running in traffic, so that’s still the thing that I need to go through in the next couple of days. But I did two or three laps behind some cars that were going out of pit lane, and it was good fun.”