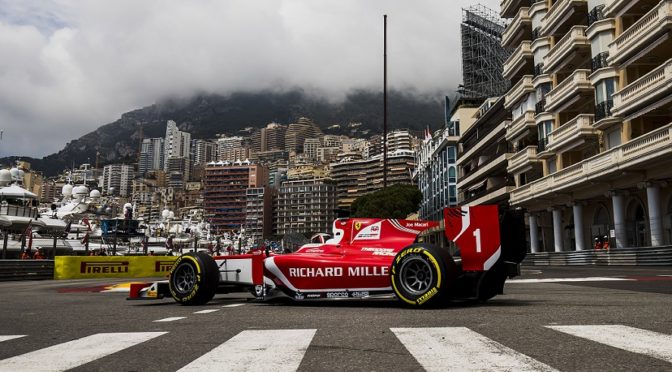 Monegasque leads the way in the Principality…
Charles Leclerc belied his lack of experience racing around his home circuit in Monaco by claiming the top spot in this afternoon’s free practice session, biding his time as he came to terms with the fabled circuit before grabbing P1 late in the session by a tenth from Sergio Canamasas and Oliver Rowland.
The Monegasque driver has lived just off the circuit for his entire life but has never sat in a racing car on it, until today: he spent the session slowing easing up to speed before putting in a lap of 1:19.722 ten minutes before the close, setting a target that his rivals were unable to overturn.
The session got underway with overcast but warm conditions, with no one wasting any time to get on circuit: Jordan King was the first driver on track, with all of his rivals following him out within the first minute. Rowland was the first to set a competitive time, at the ten minute mark, with Canamasas, Alexander Albon, Gustav Malja and Norman Nato alternating on top of the timesheets before Leclerc annexed it for himself.
With so little time before qualifying the entire field was anxious not to put a wheel wrong at the famously tight and twisty circuit: apart from a small collision between Nabil Jeffri and Sergio Sette Camara, and a moment where Artem Markelov lost a piece of his car, there was little to concern the race marshals.
A late VSC test delayed the field briefly before the track went green again, with Rowland moving back up into the top 3 in the last minute of the session, ahead of Nato, Albon, Luca Ghiotto, Nyck De Vries, Markelov, Nicholas Latifi and Johnny Cecotto, most of whom lost quicker laps to traffic.
This afternoon’s session will be split into 2 parts to avoid that traffic, with the odd numbered cars running first and the even numbered cars in the second session: pole will go to the fastest driver overall, with the fastest in the other session given P2 and the rest of the field lining up directly behind them in session order. With traffic out of the way, the laptimes will tumble as the fight for pole intensifies.