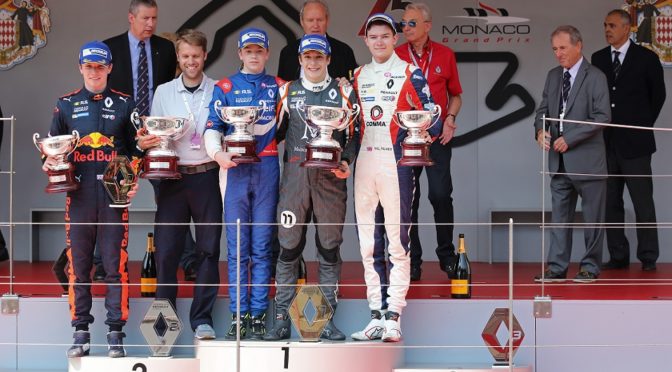 SACHA FENESTRAZ DOES IT AGAIN AT MONACO

One year after his victory in the Principality, Sacha Fenestraz (Josef Kaufmann Racing) did it again in winning the Formula Renault Eurocup race and curtain raiser for the F1 Monaco Grand Prix for the second time. Starting from pole position, the Frenchman took the honours ahead of Robert Shwartzman (R-ace GP) and championship leder, Will Palmer (R-ace GP). Red Bull Junior Team member Daniel Ticktum (Arden Motorsport) was fifth again to claim his second win of the weekend among the rookies.
In contrast to yesterday, Sacha Fenestraz was on pole ahead of Will Palmer. Behind them it was Robert Shwartzman, Daniel Ticktum, Max Defourny (R-ace GP) and Alex Peroni (Fortec Motorsports).

Sacha Fenestraz made the most of starting pole to maintain the lead ahead of Will Palmer and Robert Shwartman. Further back, Yifei Ye (Josef Kaufmann Racing) spun at the exit of Sainte Dévote, while Frank Bird (Fortec Motorsports) fell victim to the traffic at the Loews hairpin.

Sacha Fenestraz (Josef Kaufmann Racing): “It is fantastic to have won twice from three starts at Monaco ! It was a long race and I wasn’t sure there much time left when the safety car came out. It is a shame it ended the way it did, but Neubauer’s car was parked in a dangerous area and it would have been better if there was a red flag like last year! I knew that if I avoided mistakes, the win was practically in the bag. The team has been doing a fabulous job and it is finally paying off. Like last year, I’ve taken my first win of the year at Monaco. I hope it will continue the series of podiums that began at Pau. We know have to be consistent just until the conclusion of the season.”