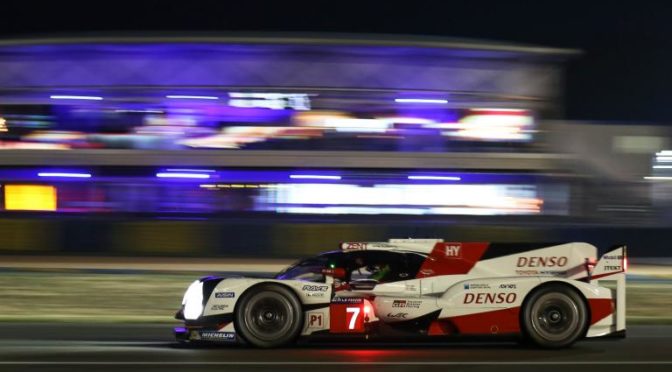 The first qualifying session for the 2017 24 Hours of Le Mans got off to a late start. An incident in the Road to Le Mans free practice session immediately prior to qualifying required guardrail repairs. This delayed the start of qualifying and shortened the session by 20 minutes.

Potentially because of this, and a slew of slow zones at the beginning of the session, the qualifying times were not as low as expected. Instead, teams chose to run through their driver rotations to ensure the required night laps were completed.

In LMP1, Toyota Gazoo Racing did not better its time from the Le Mans test day. The #7 was still the quickest though. Kamui Kobayashi set the car’s best lap, a 3:18.793. He was followed by his teammate Kazuki Nakajima in the #8, who turned a 3:19.431.

The biggest drama came from the LMP2 category, where TDS Racing waited until the final 10 minutes of the session to reset the LMP2 lap record. Matthiew Vaxivière turned a 3:29.333 in the #28 ORECA. This lap knocked the #31 Vaillante Rebellion ORECA to the second spot on the timing screens. Driver Bruno Senna’s best lap was a 3:29.851.

The CEFC Manor team locked out the top two spots in LMP2 early in the session, but by the checkered flag their best entry was the #25 driven by Vitaly Petrov. His lap of 3:30.502 placed the car third in class.

ORECA cars filled out the top five positions in the category. The highest non-ORECA was the #36 Signatech Alpine Matmut entry in sixth.

Aston Martin was tops in both LMGTE Pro and LMGTE Am.

The highest placing entry from the defending race winner, Ford, was the #67 in fifth. It’s best was a 3:54.118 from Andy Priaulx.

The LMGTE Am category had the closest fight at the top, but the top three were set early in the session and stayed that way until the finish. Pedro Lamy in the #98 Aston Martin Racing Vantage was the best of the group with a 3:55.134. He was followed by the #77 Dempsey-Proton Racing Porsche in which Matteo Cairoli turned a 3:55.692.