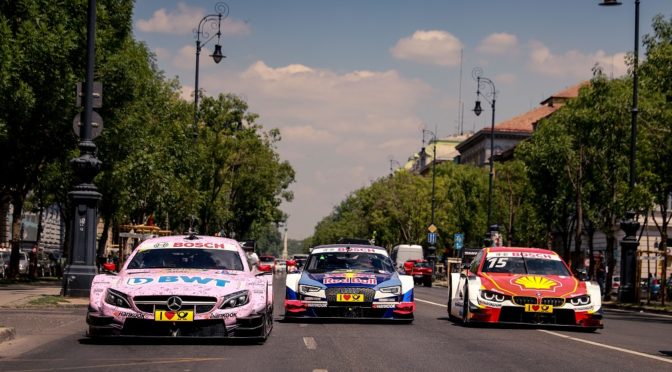 This weekend (16-18 June, 2017), the DTM will have its third round of the season at the Hungaroring near Budapest. On Thursday, a taste of the powerful DTM cars from Audi, BMW and Mercedes-AMG was to be had in the Budapest city centre. There, the DTM stars presented themselves to the public, signed countless autographs and posed for photos with the fans before rounding out the action with full-throttle action on the public roads of the capital. With the cars, all over 500 hp strong, Mattias Ekström, Augusto Farfus and Gary Paffett drove from Heroes’ Square to the bank of the Danube and back, and left a strong acoustic impression.

Official action starts for the 18 DTM drivers with first free practice on Friday afternoon at 17.00 hrs. On Saturday (from 14.30 hrs) and on Sunday (from 15.00 hrs), the fifth and sixth race of the season will be on at the Hungaroring. Both races will be broadcast live on ARD. The support package includes races of the FIA Formula 3 European Championship and the TCR International Series, in which local hero Norbert Michelisz will be competing as a guest driver.

Additional images can be found on our media website at media.dtm.com. Video footage from the DTM cars driving in Budapest has been made available at dtm.atmosphere.zone.