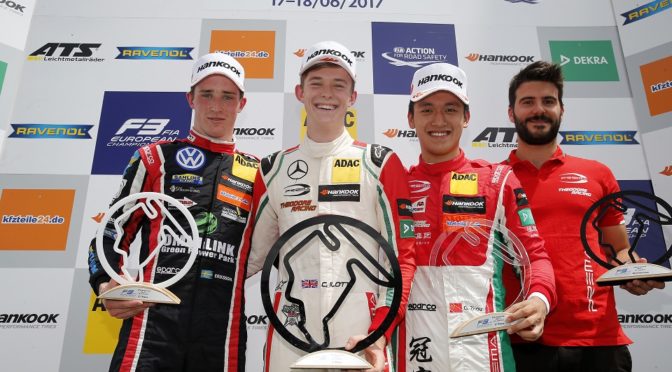 Callum Ilott (Prema Powerteam) was unbeatable in today’s eleventh race of the FIA Formula 3 European Championship season at the 4.381 kilometres long Hungaroring. The Brit started the race from pole position and won after 22 laps with a margin of 8.6 seconds from his closest rival Joel Eriksson (Motopark) from Sweden. In bright sunshine near the Hungarian capital of Budapest, third place went to Chinese Guanyu Zhou (Prema Powerteam). In the drivers’ standings, German Maximilian Günther (Prema Powerteam) remains on top, he finished the race in sixth place.

Because of its comparatively fluent characteristics, the Hungaroring is known for providing only few opportunities for overtaking. Well aware of this, Callum Ilott did everything to remain in front after the start. Joel Eriksson slotted into second place and initially put the leader under pressure. The latter, however, remained unfazed and held on to the lead.

Lando Norris started the race from third place on the grid, but the British rookie didn’t have a good getaway. He dropped back to 16th place and failed to make it back into the points during the race.

Out in front, Callum Ilott pulled away from his main rival Joel Eriksson more and more and eventually secured an undisputed victory. Eriksson and Zhou joined him on the podium. Classified in fourth place, Jake Hughes (Hitech Grand Prix) only just missed out on a podium finish while David Beckmann (Motopark) was able to score his first championship points by finishing fifth. Günther had to make do with sixth place, followed by the best rookie driver Joey Mawson (Van Amersfoort Racing), Jehan Daruvala (Carlin), Mick Schumacher (Prema Powerteam) and Ferdinand Habsburg (Carlin).

Callum Ilott (Prema Powerteam): “My start was okay. In the first corners, Joel tried to attack me, but from lap two onwards, I was able to pull a gap and then extend my advantage. Actually, I had expected my tyres to degrade more, but fortunately, this wasn’t the case. Thus, I was able to continuously extend my lead and then win the race.”

Joel Eriksson (Motopark): “My start wasn’t particularly good and as the start is one of the few possibilities to make up positions at this track, I stayed in second place behind Callum. Nevertheless, it is nice to be back on the podium after my weaker performance from yesterday.”

Guanyu Zhou (Prema Powerteam): “I am happy to have scored my first podium finish of the season. At the start, I managed to overtake Lando and then I tried briefly to attack Joel. Later on, I saved my tyres and particularly tried to ensure that the gap to Jake Hughes behind me wouldn’t get too small. I managed quite well, my third place was never under threat.”