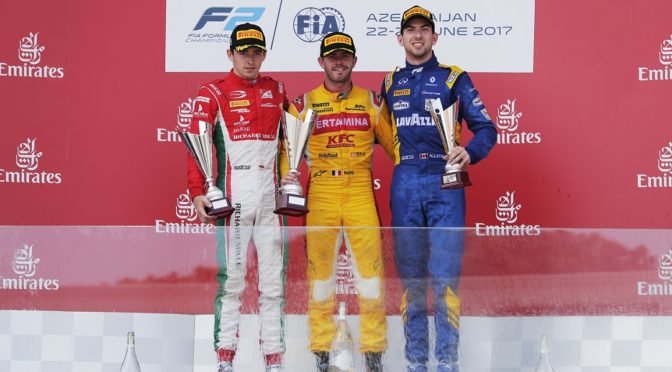 Norman Nato grabbed this afternoon’s FIA Formula 2 Championship Sprint Race victory at the Baku City Circuit despite following the championship leader Charles Leclerc across the line: the Monegasque driver had a 10 second penalty which sent the win back to the Frenchman, ahead of Leclerc and Nicholas Latifi.

The seeds of the victory came at the start, when a storming start by Nato from P4 saw him alongside front row starter Oliver Rowland when the pair were squeezed by poleman Ralph Boschung: the Briton slid inside and through into the lead at turn two while the Frenchman had to defend from a fast charging Latifi behind him, while further back Leclerc had shuffled back to 10th before starting his fightback on the very first lap.

Next time through Nato was desperate to dispatch Boschung, and the pair touched as the Frenchman dived down the inside into turn 2, losing part of his right front wing in the process before heading off after Rowland with Latifi in his wake. It was only 2 laps before fourth placed Nyck De Vries eased by Boschung, and then one more lap to move into the podium positions as he blasted past Latifi on the front straight.

It was all to change in short order though, when Rowland slowed from the lead and De Vries ran deep at turn 3 with the pair both out with mechanical gremlins, handing the lead to Nato from Latifi and Jordan King, with Leclerc already up to P4 and looking for more. The Monegasque was running a second faster than anyone as he strung a collection of qualifying laps together: he was past King on the front straight on lap 10, through Latifi there 2 laps later, and it was only a matter of time before he claimed the lead as he hunted down the first perfect weekend in championship history.

On lap 17 the bitter call came on the screens that Leclerc (and Sergio Canamasas) would receive 10 second time penalties for failing to slow sufficiently for yellow flags earlier in the race: Nato didn’t defend a lap later when the Monegasque grabbed the lead on the road, but as the laps rolled down there was insufficient time (or tyres) to build a big enough gap to hold the lead. Leclerc took the flag 1.3 seconds ahead of Nato, which because an 8.7 second win for Nato, with Latifi holding on for the podium ahead of a race long battle between King, Sergey Sirotkin, Artem Markelov and Nobuharu Matsushita, with Luca Ghiotto claiming the final point of the race.

Pole, two fastest laps, a win and a second means Leclerc leaves Baku with an extended lead in the drivers’ championship over Rowland, 122 points to 80, with Markelov on 76, Ghiotto on 57, Latifi on 53 and Matsushita on 50 points, while in the teams’ championship RUSSIAN TIME and DAMS lead the way on 133 points each ahead of PREMA Racing on 124, ART Grand Prix on 94 and Rapax on 61 points as the grid turns towards Spielberg for the 5th round of the 2017 championship.