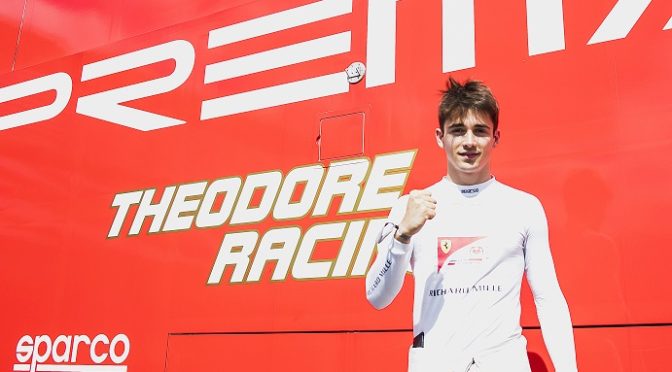 Charles Leclerc made it six poles in six rounds with a stunning lap in this afternoon’s FIA Formula 2 qualifying session in Silverstone, easily continuing his perfect qualifying form to take the top spot by over four tenths from championship rivals Oliver Rowland and Norman Nato.

The Monegasque driver was the fastest man on both sets of tyres, running quicker again on his second set to top all three sectors for a combined lap of 1:38.427 to break the hearts of any of his rivals who were hoping for a reversal of fortune at the fast, flowing circuit.

The session got underway in overcast and changeable conditions, and with a little rain earlier in the day the drivers were taking no chances and were immediately onto the circuit when the lights went green. Jordan King was the first man to set a competitive time, but the local driver was knocked off the top spot mere seconds later by Leclerc with a 39.1s lap, topping all the sectors on his way there.

The entire field returned to the pits until there were just 10 minutes remaining, when they returned en masse to look for a better time. With most of the top runners following each other the top spot changed as each of them crossed the line: first Nato, then Rowland, and finally Leclerc, who cruised around on track as the others return to the pits in case there were any more challenges to his pole.

He needn’t have worried, as the other filled the spaces behind the top three: King, Artem Markelov, Nicholas Latifi, Sergio Canamasas, Nobuharu Matsushita and Sergio Sette Camara were all within a second of the top spot and will be looking for more reward in tomorrow’s feature race.