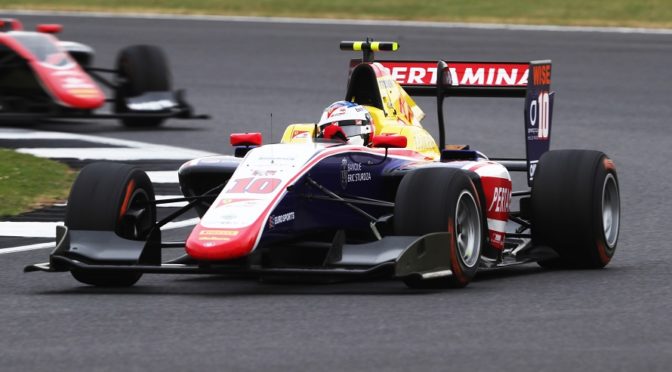 Giuliano Alesi has dominated this morning’s Race 2 at Silverstone for his maiden GP3 win, leading all the way from lights to flag and controlling the pace all the way despite a close late battle behind him to lead home Jack Aitken and Niko Kari.

Poleman Dorian Boccolacci was unable to take the start, but his misfortune was to his teammate’s advantage: when the lights went out Alesi tore away from P2, leading his rivals unopposed into turn 1. Behind him Aitken made a scorching start, easily disposing Arjun Maini and a slower Kari who just held off Anthoine Hubert, giving George Russell a line through his teammate and into P5 as the field headed away.

Kari soon made up for his disappointing start by dispatching Maini for P3 on lap 3 as Alesi and Aitken traded fastest laps, but they were slowed next time round as Steijn Schothorst and Julien Falchero came together and found the gravel, prompting a safety car period to dispose of the stricken vehicles.

The race was live again on lap 7, with Alesi easily controlling the restart before starting to rebuild his lead, while further back Russell was on a charge: yesterday’s winner was looking to return to the podium today and soon dispatched Maini into the final complex after hounding him all around the circuit. Teammate Hubert tried to follow him through but was denied, handing Alessio Lorandi a run at the Frenchman: the pair touched and Hubert ran wide, but both returned to the fray almost immediately.

Out in front Alesi was controlling the pace: Aitken threw everything he had at him but it was not enough, with the Frenchman crossing the line 0.7s ahead for his first series win. Behind them Kari had his mirrors filled by Russell’s car for the closing stages of the race: the Briton tried to use all of his local knowledge but ran out of time to knock the Finn off the podium. The Jenzer pair of Maini and Lorandi brought home more points to the team in P5 and 6, ahead of a late battle for the final points as Kevin Joerg held on against a charging Hubert.

And despite the lack of podium Russell was delighted to leave his home race leading the drivers’ standings on 92 points ahead of his teammates Hubert on 57, Nirei Fukuzumi on 54, Aitken on 52, with Lorandi on 51 and Alesi on 43, while in the teams’ fight ART Grand Prix are well ahead of their rivals on 241 points ahead of Trident on 91 and Jenzer on 87 points as the grid looks towards Round 4 in Budapest in just 2 weeks’ time.