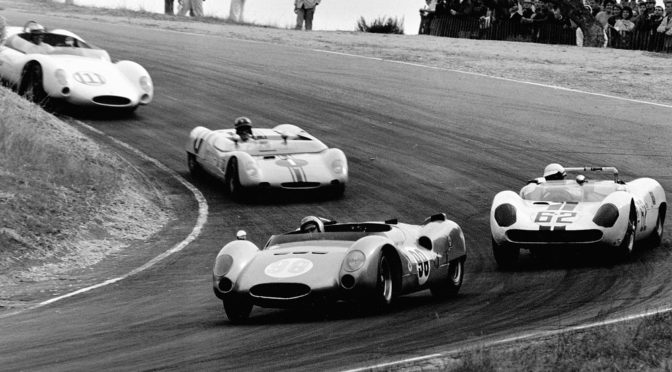 MONTEREY, Calif., August 4, 2017 — Rolex Monterey Motorsports Reunion attendees will have the chance to gaze upon 60 years of Mazda Raceway Laguna Seca racing history in the paddock on August 17-20. A special Racing Through the Decades feature display will showcase 12 prominent racing vehicles with history at the iconic circuit.

The contrast will be prevalent with the first and most recent winners at Mazda Raceway Laguna Seca being displayed across from one another. The 1956 Ferrari 500 Testa Rossa that Pete Lovely drove to victory at the inaugural Laguna Seca event, the Pebble Beach Road Races in 1957, and the 2016 K-PAX Racing McLaren 650S GT3 that Alvaro Parente won the Pirelli World Challenge event in last October will bookend a dozen chapters of motorsports in the Monterey Peninsula under one tent.

Located in the paddock, fans will have a chance to see the race cars that helped make Mazda Raceway Laguna Seca famous (and vice versa) during the prestigious event where 550 race cars of historic provenance will do what they were designed to do – race – throughout the weekend during a hallmark of the acclaimed Monterey Classic Car Week.

“The yearlong celebration of Mazda Raceway Laguna Seca’s 60th anniversary is brought to life in the Racing Through the Decades feature display that we are thrilled to share at the Rolex Monterey Motorsports Reunion,” said Gill Campbell, Senior Vice President of Event Operations of Mazda Raceway Laguna Seca. “The visual element illustrates the history and importance of the race track and the privilege we have had in hosting some of the greatest cars and drivers in all of motorsports.”