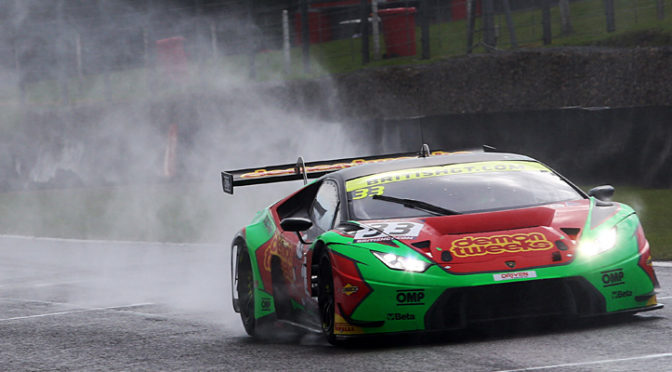 The heavy rain that fell just before this afternoon’s opening session ensured wet tyres were essential for both 10-minute segments.

Championship leader Minshaw, who could seal the title with a round to spare this weekend, was immense in the worst of the conditions as he continually thwart James Littlejohn’s attempts to claim provisional pole.

The Barwell Lamborghini improved on each of its first three laps before Littlejohn’s Macmillan AMR Aston Martin finally overhauled the Huracan. But Minshaw wasn’t finished and circulated quicker again on consecutive laps to establish a 0.718s advantage ahead of the GT3 Pro session.

Liam Griffin also improved late on to vault Barwell’s second Huracan up to third ahead of TF Sport’s Mark Farmer who initially looked like posing the biggest threat to Minshaw. Richard Neary put the Team ABBA with Rollcentre Racing Mercedes-AMG fifth, while Rick Parfitt Jnr – whose Bentley is notoriously tricky in the wet – finished sixth.