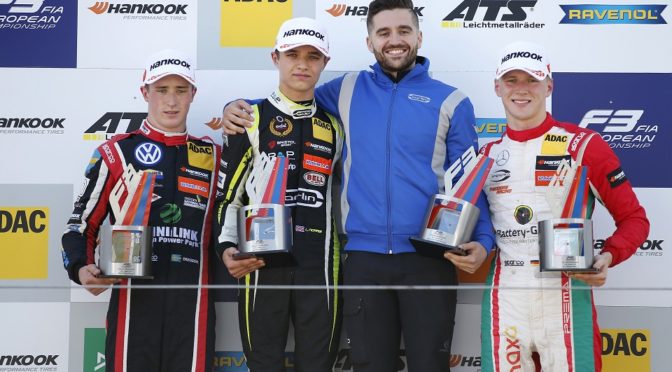 LANDO NORRIS WINS IN THE DUNES OF HOLLAND

Lando Norris kept the lead with a good start while Ferdinand Habsburg (Carlin), who was next to him on the grid, already lost a position to Joel Eriksson on the first few metres. In turn 1, Guanyu Zhou (Prema Powerteam) locked up and collided with Ralf Aron (Hitech Grand Prix), who, in turn, ran into the car driven by David Beckmann (Motopark). The German’s car turned over and got stuck in the gravel trap upside down. While the safety car led the field, David Beckmann got out of his Dallara unscathed.

Racing resumed at the start of lap six. Joel Eriksson tried to make an early attack on Lando Norris for the lead, but the McLaren junior driver, who showed a convincing performance during the Formula 1 test in Budapest in early August, successfully turned down Eriksson’s attempt. After that, Norris managed to pull clear from the rest of the field more and more and scored his sixth race win of the season after 21 laps.

Behind Lando Norris, Joel Eriksson took the chequered flag in second place while Maximilian Günther’s third place was never really under threat. The battle for fourth place that involved Callum Ilott (Prema Powerteam) and Ferdinand Habsburg lasted a little bit longer. After the restart, the Austrian overtook the Brit, but was unable to pull a gap in the following laps. Habsburg temporarily had a little advantage, but in the closing stages, Ilott increased the pressure on the Carlin driver again. However, the latter still managed to bring his fourth place home.

Lando Norris (Carlin): “The most important thing for the race was that I started from pole position and was able to take the lead at the start, because overtaking is almost impossible at this track. My restart after the safety car wasn’t perfect, but it was enough to keep Joel at bay. After that, I could pull away more and more and score valuable points with this victory. Too bad that my team-mate Ferdinand Habsburg started from the slightly more damp side of the track and therefore dropped out of the top 3.”

Joel Eriksson (Motopark): “I am happy with my second place, but I am even happier that we finally were able to battle for top positions in yesterday’s qualifying again. In the race, I was on old tyres while Lando at least had two new ones. I think that was an advantage for him. At the restart, I tried to overtake him, but he defended first place. I reckon that second place was the maximum for me.”

Maximilian Günther (Prema Powerteam): “I can certainly live with third place, I have scored valuable championship points again. I had a good start and I was able to overtake Ferdinand Habsburg on the outside of the first corner. My restart was good as well. When it was clear to me that I didn’t have a chance to overtake the driver in front of me, I decided to save my tyres and drove to the finish without taking any risks.”