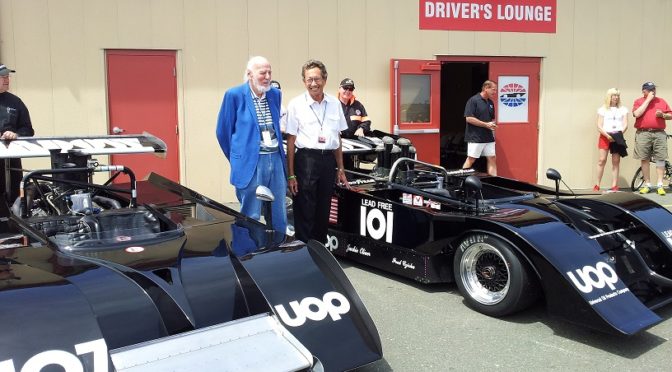 Marina, CA — Shadow is what Don Nichols named his race cars, but the image could pertain as well to the man himself. Tall, lean and generally reserved, he was known to have a mysterious background in military intelligence — a mystery he cultivated by generally declining to speak of it.

Yet he strove for a high profile in the gaudy world of international motorsports. His Shadow Cars in their glossy black livery dominated the short, final season of North America’s Big Block Can-Am season (1974, champion Jackie Oliver). In Formula 1 Nichols never achieved dominance, but by persevering from 1973 into 1980 he lasted longer by far than any other American-based team to date. Alan Jones scored Shadow’s one Grand Prix victory at Austria in 1977.
A Missourian, Nichols was born at Eldon on Nov. 23, 1924. An only child, he lost his mother while still an infant when a tornado ripped apart the taxi they were riding in. As his father’s work as an aeronautical engineer required frequent travel, the boy grew up on his grandfather’s farm outside Pleasant Hill, Mo. There young Don learned about horses, taught himself about cars, and starred as a high school track athlete during the early years of World War II.
“But I never graduated,” he admitted. “I was afraid the war was gonna end and I would miss it!”
Signing up as soon as the Army would take him, Nichols trained as a paratrooper, qualified for an elite Pathfinder unit of the famed 101st Airborne Division, and was one of the first to jump at Normandy before dawn on D-Day, 15 miles behind German lines. He was promptly knocked unconscious by an artillery shell.
A few months later, recovered and redeployed to Belgium’s Battle of the Bulge, he took several bullets from a machine pistol. Fortunately, their impact was attenuated by the vest he was wearing — because it was stuffed full of nice, absorbent explosives.
When peacetime proved too peaceful for action man Don Nichols, he rejoined the military, became a Counter Intelligence officer and served in Korea and Japan; this is the period he kept veiled for the rest of his life.
Fluent in Japanese and fond of the country, upon leaving the Army he remained in Tokyo to redevelop himself as a business entrepreneur in Japan’s nascent automobile and auto racing industries. Don did some racing himself, and when Fuji Speedway came along in the 1960s, he found a key role to play in its design, construction and event promotion.
In 1968 he moved his growing family back to California, where in looking for fresh opportunities he soon connected with a brilliant young engineer named Trevor Lee Harris. Fascinated by Harris’ idea for an ultra-low-profile Can-Am car, which he believed would make it ultra-fast on straightaways, Don started Nichols Advanced Vehicles Systems (AVS) to build it.
What would they name their new racer? “Well,” explained Don, “Trevor and I sat around one day talking about absolutely the lowest thing there could be. It would be two-dimensional. A shadow.” Thus began a new chapter in American racing.
Don Nichols was 92 when he died Sunday (Aug. 21)