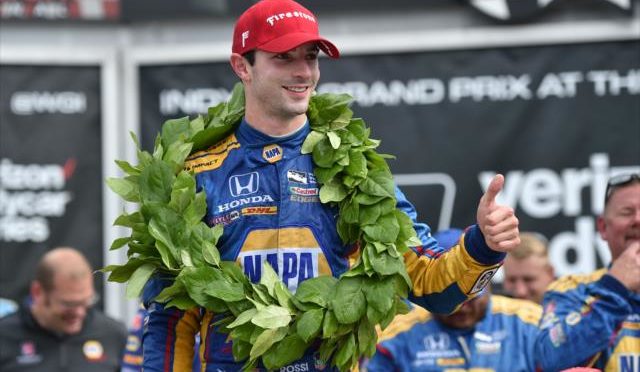 WATKINS GLEN, New York (Sunday, Sept. 3, 2017) – Alexander Rossi completed a dream weekend with a win in the INDYCAR Grand Prix at The Glen. Josef Newgarden endured a nightmare incident in the race that leaves the Verizon IndyCar Series championship battle wide open for the 12th straight year heading to the season finale.

Rossi won the 60-lap race at iconic Watkins Glen International from the pole position on the same weekend it was announced he would return to Andretti Autosport next season in a multiyear deal along with sponsor NAPA Auto Parts. The 25-year-old Californian led a race-high 32 laps and drove the No. 98 NAPA Auto Parts/Curb Honda across the finish line 0.9514 of a second ahead of four-time Watkins Glen winner Scott Dixon.

Points leader Josef Newgarden finished 18th after his car sustained damage in a collision leaving the pits. The Team Penske driver saw his championship lead slip to three points over Dixon with the GoPro Grand Prix of Sonoma, offering double race points on Sept. 17, remaining. Seven drivers are still mathematically alive in the title hunt. The Verizon IndyCar Series champion has been determined in the season’s final race every year dating to 2006.

Rossi overcame a malfunctioning fuel probe on his second pit stop that left him short of Sunoco E85 ethanol and forced an earlier third stop than scheduled. From there, Rossi laid down laps at near-qualifying pace, regaining the lead on Lap 29 and building an advantage of more than 12 seconds. The full-course caution for Newgarden’s incident on Lap 46 bunched the field, but Rossi kept Dixon, in the No. 9 NTT Data Honda for Chip Ganassi Racing, at bay over the 11-lap dash to the finish.

The victory was the second for Rossi in the Verizon IndyCar Series and first since his memorable triumph as a rookie in the 2016 Indianapolis 500 presented by PennGrade Motor Oil.

“An amazing job by the whole team today,” Rossi said. “We had an issue in the beginning with the fuel thing, but whatever. It doesn’t matter, the team recovered. We had the pace to do it, but it’s pretty amazing.