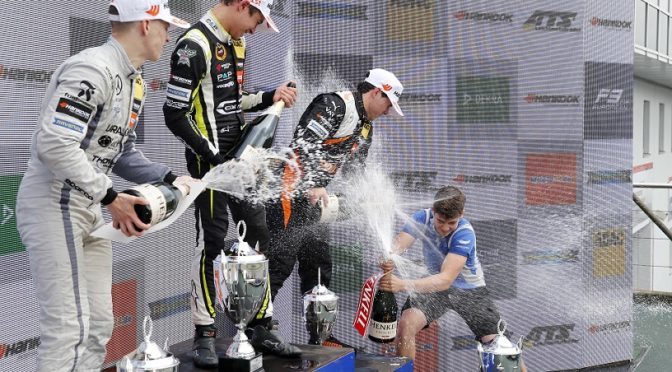 Lando Norris (Carlin) remained unfazed by the rainy Eifel weather in the opening stages of the race at the 3.629 kilometres long Nürburgring sprint circuit and dominantly won the 22nd race of the FIA Formula 3 European Championship season from Jake Hughes (Hitech Grand Prix) and Joey Mawson (Van Amersfoort Racing). For McLaren junior driver Norris, it was his eighth win in the FIA Formula 3 European Championship season while Australian Mawson scored his maiden podium finish in the junior single-seater series. Norris extended his lead in the drivers’ standings to 338 points and thus is 36 points clear of second-placed Maximilian Günther (Prema Powerteam). The German, who is backed by Mercedes-AMG, had to make do with 13th place after an early pit stop following a collision with Ralf Aron (Hitech Grand Prix).

The race went underway in the rain. British driver Lando Norris was unaffected by the precipitation and he took the lead at the start. Behind him, his compatriots Callum Ilott (Prema Powerteam) and Jake Hughes followed in second and third place, but Hughes overtook Ilott in the opening stages of the race. On lap three, newcomer Sacha Fenestraz (Carlin) missed his braking point and ran into the rear of Nikita Mazepin’s car (Hitech Grand Prix). The Russian, who was fourth at the time, retired and the Frenchman incurred a drive-through penalty. Race control called for a Full Course Yellow (FCY) to allow for Mazepin’s car to be recovered from the run-off area. FCY means no overtaking and reduced speed for all competitors.

After four laps, the order in front was Norris from Hughes, Ilott, Mawson and Tadasuke Makino (Hitech Grand Prix). While Norris out in front had already built up an advantage, Ilott lost out in the battle for third place to rookie driver Mawson. Meanwhile, it wasn’t plain sailing for the front runner either: on lap eight, he briefly came off the track, but his lead was never in jeopardy. Eventually, he scored an undisputed eighth FIA Formula 3 European Championship season victory from Jake Hughes, who brought his equally undisputed second place home.

The battle for third became considerably more exciting in the closing stages of the race. Callum Ilott put Joey Mawson under pressure and Tadasuke Makino was lurking behind the duo. The three youngsters staged a thrilling battle, in which Ilott initially attacked Mawson, but the latter successfully defended his position. Makino used this chance to get past Ilott for fourth. With Mawson ahead of Makino and Ilott, the trio crossed the finish line. After the race, the Japanese was penalised with a 5 second time penalty, as he was too fast under FCY. Thus, ended up in seventh position.

Lando Norris (Carlin): “There isn’t too much to say about my race. My start was good, I managed to keep Jake and Callum at bay. After that, I was able to pull clear from the rest of the field and build up an advantage. On lap eight, I had a hairy moment when I briefly went off the track and lost a few seconds. Otherwise, everything went well and my car was great, so I can’t complain.”