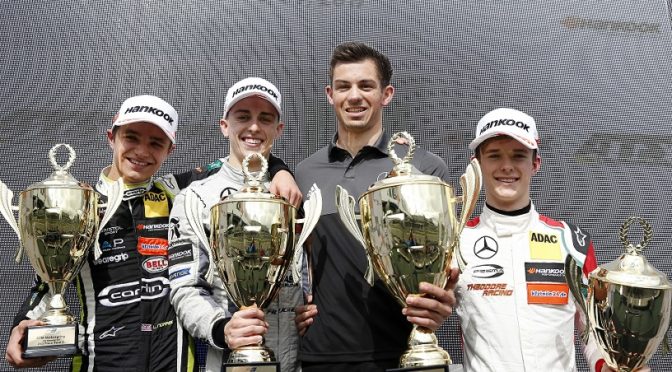 At the 3.629 kilometres long Nürburgring sprint circuit, Jake Hughes (Hitech Grand Prix) won from Lando Norris (Carlin) and Callum Ilott (Prema Powerteam). Hughes, who had already scored five podium finishes this season, led from the start and not only collected his maiden FIA Formula 3 European Championship victory, but also scored the first win of the season for his team Hitech Grand Prix. With his 17th podium finish of the year, Lando Norris extended his lead in the FIA Formula 3 European Championship drivers’ standings. Now, he has a total of 356 points and an advantage of 54 points over his main rival Maximilian Günther (Prema Powerteam).

Having started from pole position, Jake Hughes led the field into the first corner and immediately pulled a gap. Behind him, Callum Ilott had to defend his position against Lando Norris until the McLaren protégé overtook his compatriot on lap three. However, it was only in the closing stages of the race that Norris was able to reduce the gap to race leader Hughes in such a way that he was able to put the latter under pressure. However, the Hitech driver didn’t let himself get forced into an error and collected his maiden FIA Formula 3 European Championship victory as a result. Behind a buoyant Hughes, Lando Norris took the chequered flag in second place. Callum Ilott rounded out the podium with a clean sweep of the top three for British drivers.

Jake Hughes (Hitech Grand Prix): “This race was mega and my car was really good, too. I already started from the front row the first time I competed in the FIA Formula 3 European Championship during the season finale at Hockenheim last year, but I didn’t think that it would take so long for me to score that first win. At the start, I was able to take the lead and then I was able to keep my advantage for a long time. When Lando got closer and closer towards the end, I thought: ‘That black and yellow car better leave me alone’, but eventually, he didn’t have a chance to attack me.”

Lando Norris (Carlin): “My start was good and I managed to overtake Callum after a few laps. I reckon that the quick overtaking move was the key to second place. At the end, I was able to reduce my gap to Jake from over three to less than one second, which wasn’t too bad. Second place is a good result as it allows me to extend my points’ lead.”