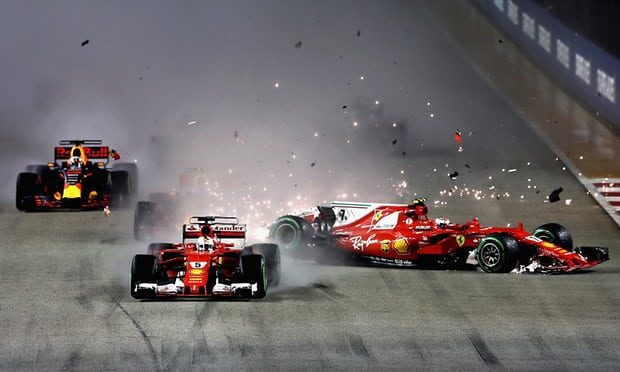 LCH IS HANDED A VICTORY… VETTEL, VERSTAPPEN AND KIMI DO A MALDONADO!

LCH handed the victory at the Singapore Grand Prix, after a dramatic start in which three of his rivals took one another out. It was a victory which was unexpected but that the Mercedes driver grasped energetically and in doing so has established a commanding lead of 28 points over Ferrari’s Sebastian Vettel.

On a wet track, Vettel clashed with his team-mate Kimi Raikkonen and the Red Bull of Max Verstappen off the start line and all three were eliminated from the race. Hamilton, who had started from fifth, avoided the crash and, having taken the lead, held it until the finish. He was followed home by the Red Bull of Daniel Ricciardo in second and the sister Mercedes of Valtteri Bottas in third.

“What a turnaround today,” Hamilton said. “Fantastic job on the strategy, what a great day.”