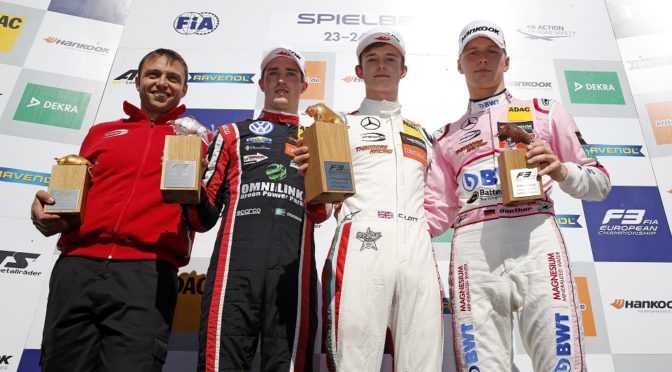 Callum Ilott (Prema Powerteam) started the ninth weekend of the FIA Formula 3 European Championship at the 4.318 kilometres long Red Bull Ring with a victory. Behind the Brit, Joel Eriksson (Motopark) and Maximilian Günther (Prema Powerteam) took the chequered flag in second and third place. Points’ leader Lando Norris (Carlin) finished fourth in the 25th race of the 2017 FIA Formula 3 European Championship season. Thus, his margin over Maximilian Günther, second in the drivers’ standings, was reduced by three points to 70 points.

Callum Ilott benefited from his pole position and took the lead on the first metres. Behind him, Joel Eriksson overtook Maximilian Günther for second place while Lando Norris returned from the opening lap in fifth behind Tadasuke Makino (Hitech Grand Prix). Behind David Beckmann (Motopark), Nikita Mazepin (Hitech Grand Prix) was in seventh place at the circuit in Styria until he retired due to a collision with Harrison Newey (Van Amersfoort Racing) on lap four. The Brit had to visit the pits for a brief stop, allowing Mick Schumacher (Prema Powerteam) to move up into seventh place in the opening stages of the race.

Four laps later, Ferdinand Habsburg (Carlin), the only Austrian in the field, overtook the two Germans Beckmann and Schumacher and progressed from eighth to sixth place. The great-grandson of the last Austrian emperor also brought this position home.

Further ahead, Lando Norris fiercely attacked Tadasuke Makino during the final two laps, after which the McLaren protégé overtook the Honda-backed Japanese. However, the Brit was unable to mount a challenge on the trio in front, so that Callum Ilott eventually crossed the finish line as the winner ahead of Joel Eriksson and Maximilian Günther. Norris secured fourth place from Makino, Habsburg, Schumacher, Beckmann, Guanyu Zhou (Prema Powerteam) and Pedro Piquet (Van Amersfoort Racing).

Callum Ilott (Prema Powerteam): “For me, it has been a good weekend at one of my favourite tracks so far. Qualifying was a close affair, but I managed to come out on top. My start into the race wasn’t particularly good, Joel’s getaway was considerably better. However, I was able to decide the battle with him on the opening lap in my favour. After that, I controlled the race and I am now happy with this win.”

Joel Eriksson (Motopark): “I am delighted with this podium finish. At the start, I managed to overtake Maximilian and put Callum under pressure on the opening lap. Unfortunately, I couldn’t find a way past him. In the remainder of the race, I tried to keep the gap to him as small as possible to be able to benefit from a possible mistake, but as he didn’t make any, my position didn’t change either.”

Maximilian Günther (Prema Powerteam): “My start wasn’t good, so I lost a position to Joel as a result. That was it in a race that had relatively little action. To be honest, third place wasn’t my goal, I wanted to win the race. But still, I finished ahead of Lando Norris and therefore was able to slightly reduce his margin in the drivers’ standings.”