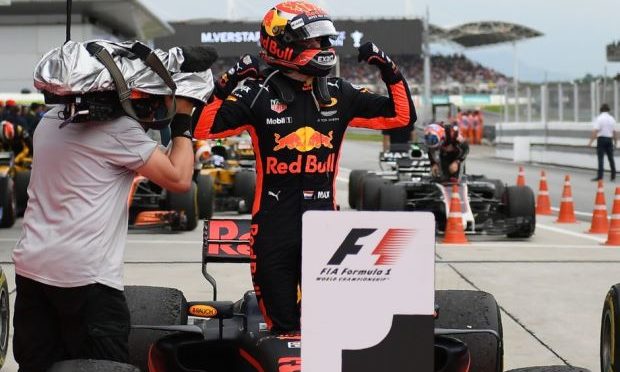 MAX VERSTAPPEN, Finish Position: WINNER, Start Position: 3rd
“It is amazing to win the race today. Straight away I could see our pace was good and that Lewis was struggling with traction. I just went for it and used all the battery power I could to get past him.
I knew that he was fighting for the championship and wouldn’t take too many risks, so I went for it. As soon as I passed Lewis I knew from there onwards I could control the race. The car was really good and our pace on the soft tyre was better than I expected.
It was a very physical race and very warm in the car, plus I haven’t been feeling that well this weekend but we managed to bring it home. You can never predict how the rest of the season will go but we keep improving the car and it is looking positive. So hopefully from now onwards we can build on this for the rest of the year and then have a good start to next season. I didn’t expect yesterday that we would be so quick today and to win here was unexpected, so I’m very happy.”
DANIEL RICCIARDO, Finish Position: 3rd, Start Position: 4th
“I enjoyed the race today. At the beginning I had hope that I could finish second but then after the pit stop it was just about holding on to third as Seb was coming. I was always going to get my elbows out and make it as hard as I could but I was surprised that there was only one proper attack from him. Maybe he used all the tyres to get up to me and then after the attack I guess he had some problems.
If I’m honest I would have liked a bit more of a fight until the closing stages just to have made it a little more exciting as the last few laps were kind of lonely. This double podium is a very positive result for us today. Obviously Max got the big one and drove well so congrats to him for the win; he drove strong all weekend. There were a few extra bits available for the cars here and I think we’re going to try that again in Suzuka; it looks positive for us at the high downforce circuits.”