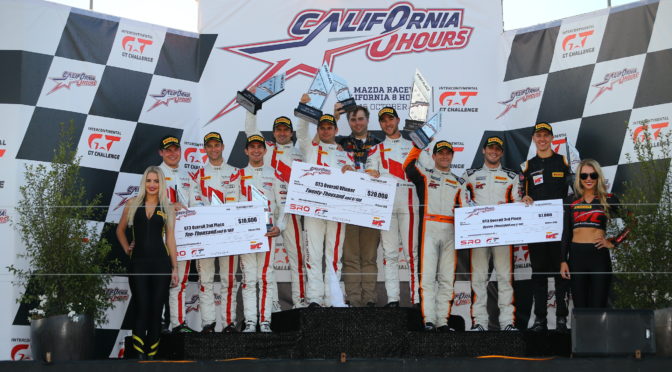 MONTEREY, Calif., October 15, 2017 — An outstanding season of major motorsports event in the Monterey Peninsula during the 60th anniversary season of Mazda Raceway Laguna Seca concluded with the longest professional event ever contested on the 11-turn, 2.238-mile race track: the California 8 Hours.

The SRO International GT Challenge made its first stop in North America to contest the event at the tail end of a doubleheader with the Pirelli World Challenge season finale. Top sports car drivers from all over the world swapped seats throughout the event in state-of-the-art GT3 and GT4 race cars to make for a compelling game of high-speed strategy between teams representing a variety of different manufacturers.

At the end of the race, the Magnus Racing team with co-drivers Pierre Kaffer, Kevin van der Linde, and Markus Winkelhock wheeled the No. 44 Audi R8 LMS to the top spot on the podium with a hard-earned win. They passed their Audi counterparts from the Land Racing team in the final hour of racing to secure the victory. K-PAX Racing, who won the GT class in last year’s Pirelli World Challenge with driver Alvaro Parente, took a well-deserved podium spot with their McLaren 650S GT3 that featured Bryan Sellers and Ben Barnicoat as Parente’s co-drivers.

“I knew I had to make a clean move to get past Chris [Mies, No. 29],” said van der Linde. “Our car was really fast, and when he started to defend his position, he was on the back foot. He was burning up his rear tires, and I could capitalize on that coming out of turn 4, passing him on the outside in the next corner.”