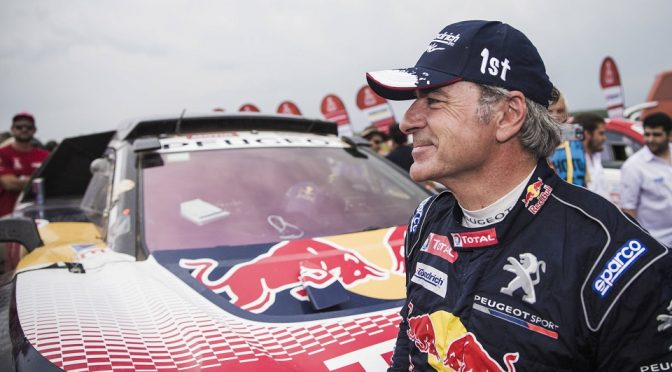 Relief, exhaustion and uncontrollable joy were the mix of emotions at the finish line of the 2018 Dakar Rally. After a 9,000-kilometre, two-week trip through South America every competitor reaching the end of the Dakar is a certified legend. As for the members of the Red Bull Desert Wings squad tasting victory, well those guys are above and beyond.

Take Carlos Sainz (ESP) of Team Peugeot Total for example. Already a titan of offroad racing thanks to two World Rally Championship titles plus a previous Dakar win before we even got started this year. ‘El Matador’ maybe in the final straight of his illustrious career but he showed he still has what it takes to pick up the big prizes. As the car category’s frontrunners slipped up one-by-one, Sainz and co-driver Lucas Cruz (ESP) kept their cool to take first place and hold it for the entire second week of the Dakar. Sainz and Cruz’s victory represents the third consecutive Dakar win for Team Peugeot Total.

“This is the hardest Dakar I’ve ever done and that includes the races I did in Africa.” – Carlos Sainz

Joining Sainz on the podium were the Toyota Gazoo Racing SA crews of Nasser Al-Attiyah (QAT)/Mathieu Baumel (FRA) and Giniel De Villiers (ZAF)/Dirk Von Zitzewitz (GER). Nasser fought back from a tough first week of racing to make sure there was pressure on Sainz all the way to the finish line. This runners-up finish is the Qatari’s 6th overall podium of a Dakar career which includes two victories.

“In the first week when we had so many problems I thought our chance to finish on the podium had gone.” – Nasser Al-Attiyah

A late charge up the general classification also saw De Villiers claim another podium finish, but that shouldn’t surprise us too much considering he now has a total of 12 Top 5 finishes at this event.

“This has been a great way to mark the 40th anniversary of the Dakar. The race has been tough and so unpredictable.” – Giniel De Villiers

While we’re on the subject of highly-decorated Dakar contestants we have to mention 13-time Dakar winner Stéphane Peterhansel (FRA) and his co-driver Jean Paul Cottret (FRA). At the Rest Day Stéphane was in the lead and on course for win number 14, but a tough second week saw him finish up in fourth overall. Sainz and Peterhansel’s fellow Peugeot driver Cyril Despres (FRA) played his part in the French manufacturer’s victory as he came to the aid of his team-mates time and time again along with co-driver David Castera (FRA).

“Unfortunately we lost our chance to win in the first week but after that we did what we could to make sure one of our team-mates would win.” – Cyril Despres

It’s also hats off to Kuba Przygonski (POL)/Tom Colsoul (BEL) who parked their MINI in fifth place overall. The result is Przygonski’s best ever Dakar finish in nine attempts spanning both the bike and car categories.

“For me it was the toughest Dakar I have ever experienced. This is my 9th Dakar so I already knew something about this race, but this year it was something different.” – Kuba Przygonski

Carlos Sainz: “I’m extremely happy with the way things have gone at this Dakar. There are a lot of people behind this victory so I say a big thank you to all the members of Team Peugeot Total and to Red Bull and all our other sponsors.  Also thanks to my co-driver Lucas and to all my family. When you have such a big lead it’s easy to lose concentration or start to go a little bit too slow. Keeping this under control was the big job during this second week. This is the hardest Dakar I’ve ever done, and that includes the races I did in Africa.”

Nasser Al-Attiyah: “Considering all the problems we had in the first week of this rally I think to finish in second place is a good result for us. I’m thankful for all the support from Toyota Gazoo Racing SA. Everybody was working so hard and I’m glad I could give the team this result as a way to say thank you. In the first week when we had so many problems I thought our chance to finish on the podium had gone. But we did a good job fighting back and second place is not bad.”

Giniel De Villiers: “When you come to this race you want to finish on the podium so we’re happy to be up there again. I think this is the toughest Dakar we’ve had in South America for sure. This has been a great way to mark the 40th anniversary of the Dakar. The race has been tough and so unpredictable. Exciting things have been happening on every stage and the leaderboard has changed so much. For Toyota to be two and three on the podium is fantastic and we say well done to Carlos who deserves his win.”

Stéphane Peterhansel: “It was a crazy Dakar. Lots of top riders were having crashes and suffering problems. We did two big mistakes ourselves and lost a lot of time. Our first problem was just before Uyuni and the second one came yesterday. If we add those two incidents up we lost about three hours. That’s too much time to lose if you want to win the Dakar.”

Cyril Despres: “This was a nice edition, starting from Peru. The Dakar needs desert, it needs dunes and open space and we found all this in Peru. We’ve been enjoying this Peugeot team spirit for four years now and it was in evidence again this time. Unfortunately we lost our chance to win in the first week but after that we did what we could to make sure one of our team-mates would win.”

Kuba Przygonski: “We’re so happy to be here at the finish. For me it was the toughest Dakar I have ever experienced. This is my 9th Dakar so I already knew something about this race, but this year it was something different. We had a good time inside the car with my co-driver Tom. We had no big issues with the car and we were able to keep a good rhythm throughout. I think we’re the youngest guys in the Top 10 so maybe we can keep improving in the future.”