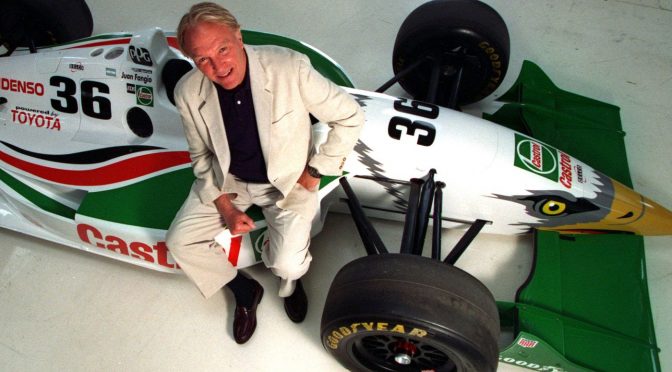 NASIR SHARES HIS MEMORIES AND GREAT MOMENTS WITH AMERICAN RACING GIANT DAN GURNEY INCLUDING A 2007 INTERVIEW OR SHOULD I SAY CONVERSATION WITH DAN AT LAGUNA SECA ORIGINALLY PUBLISHED ON PODCAST 174.

Gurney’s first major break occurred in the fall of 1957, when he was invited to test Frank Arciero’s Arciero Special. It was powered by a 4.2-litre reworked Maserati engine with Ferrari running gear, and a Sports Car Engineering Mistral body.

This ill-handling brute of a car was very fast, but even top drivers like Carroll Shelby and Ken Miles had found it difficult to handle. He finished second in the inaugural Riverside Grand Prix (behind Shelby), beating established stars like Masten Gregory, Walt Hansgen and Phil Hill. This attracted the attention of famed Ferrari North American importer Luigi Chinetti, who arranged for a factory ride for the young driver at Le Mans in 1958.

Gurney, teamed with fellow Californian Bruce Kessler, had worked the car up to fifth overall and handed over to Kessler, who was then caught up in an accident. This performance, and others, earned him a test run in a works Ferrari, and his Formula One career began with the team in 1959. In just four races that first year, he earned two podium finishes, but the team’s strict management style did not suit him.

In 1960 he had six non-finishes in seven races behind the wheel of a factory-prepared BRM. At the Dutch Grand Prix, at Zandvoort, a brake system failure on the BRM caused the most serious accident of his career, breaking his arm, killing a young spectator and instilling in him a longstanding distrust of engineers. The accident also caused him to make a change in his driving style that later paid dividends: his tendency to use his brakes more sparingly than his rivals meant that they lasted longer, especially in endurance races. Gurney was known to give the brake pedal a reassuring tap just before hard application — a habit Gurney himself jokingly referred to as “the chicken-shit school of braking.”