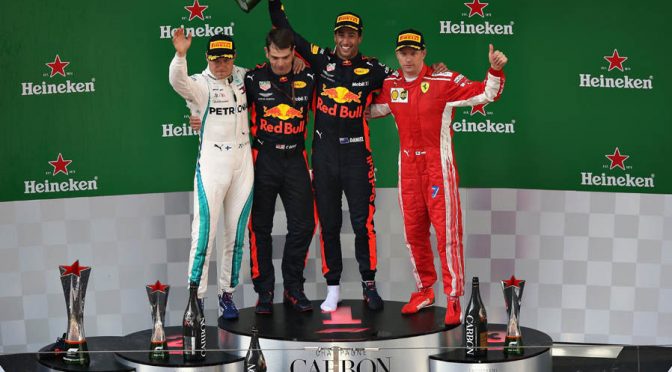 RICCIARDO WINS IN CHINA AS MAX AND VETTEL COLLIDE!

In a chaotic and action-packed finish in Shanghai, Ricciardo rose from sixth to the lead in less than 20 laps in an advance which included stunning overtakes on Lewis Hamilton, Kimi Raikkonen and Valtteri Bottas.

For all his talent this was only Ricciardo’s sixth F1 win, his emergence coinciding with Red Bull’s post-2013 dip, but the Australian is desperate for more so he can maximise his talent and fight for championships.

It’s a fun way to win for sure,” Ricciardo, out of contract at Red Bull at the end of the season, told Sky F1. “I really feel like, just give me a chance to be in a title hunt and I really believe I’ll take it.

“I feel I can capitalise on opportunities and I guess today was a good example.”

Ricciardo was labelled the “race burglar” by Sky F1’s Martin Brundle following the race, with all six of his wins coming from lower than third on the grid.

This sport’s crazy. A week ago, I was with my head down after two laps on Sunday, frustrated at the sport, frustrated at all the variables that are involved in the sport,” Ricciardo said. “Sometimes I question why I chose this sport because there’s so many other things out of your control and it does get you down a lot, but then when you have a day like this, it’s worth 50 of those bad ones.