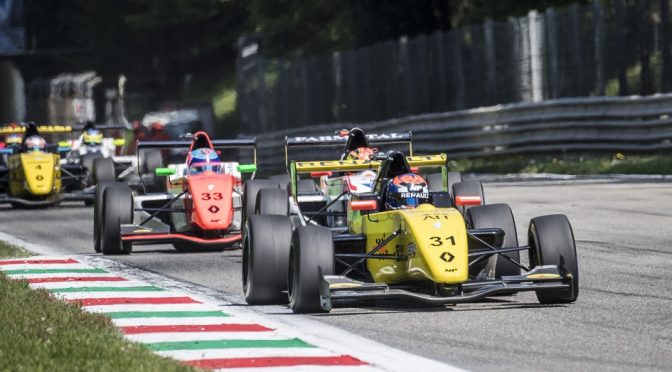 CLARK AND NASIR ARE STILL DROOLING OVER RICCIARDO’S OVERTAKING MOVES IN CHINA,THE HOST IS CONVINCED THE PENDULUM HAS BEGUN TO SWING IN FERRARI’S DIRECTION! AND ANOTHER GREAT MOTORSPORTS MONDIAL!!

Christian Lundgaard (MP Motorsport) becomes the fourth different winner in four races in the Formula Renault Eurocup this season. On Sunday, the rookie member of the Renault Sport Academy got the better of pole winner Lorenzo Colombo (JD Motorsport) to give his team their first win since their return last year and moves into the lead of the general classification. Starting eighth on the grid, Max Defourny (MP Motorsport) completes the Monza podium.

Following the intervention of the safety car, the race resumed on lap four. Lorenzo Colombo still led from Christian Lundgaard, Max Fewtrell and Yifei Ye. The British and Chinese drivers made contact at Ascari and lost a lot of ground in having to drive through the gravel. Yifei Ye was given a ten second penalty after the race for the incident.
On lap six, the safety car was back for two laps to allow for the removal of the car of Neil Verhagen (Tech 1 Racing). While Lorenzo Colombo managed to hold onto first place through turn one, Christian Lundgaard took the lead with an outside passing move at the Variante della Roggia.
Christian Lundgaard then took control of the race to go on for his first overall win and his third success among the rookies. Lorenzo Colombo and Max Defourny (MP Motorsport) complete the podium ahead of the R-ace GP entries of Logan Sargeant Victor Martins, who started 12th on the grid.
Thomas Neubauer (Tech 1 Racing), Thomas Maxwell (JD

Motorsport), Frank Bird (Tech 1 Racing), Richard Verschoor and Max Fewtrell complete the list of points scores at the end of what was an action-packed and intense race.