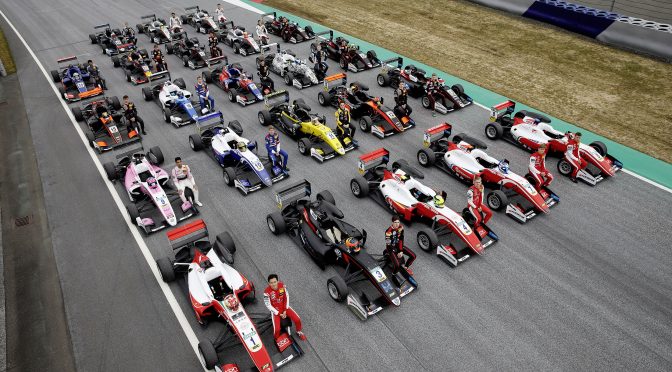 CLARK AND NASIR PREPARE FOR THE EUROPEAN LEG OF THE FORMULA 1 SEASON TO BEGIN IN ESPANA THE HOST AS USUAL PREDICTS FERNANDO WILL WIN IN SPAIN AFTER HIS GLORIOUS VICTORY AT SPA FOR TOYOTA!

On the coming weekend, the 2018 FIA Formula 3 European Championship season will be kicked off in Pau, France. At the traditional and demanding 2.76 street circuit located in Southern France, the 23 young guns will contest the first three races of the season. Ralf Aron (PREMA Theodore Racing) travels to the circuit located at the foot of the Pyrenees with fond memories as he finished third in one of last year’s races.

Ralf Aron is about to contest his third FIA Formula 3 European Championship season and it seems as if he particularly likes to race on the tight streets of Pau. In addition to the third place he secured last year he clinched another three top-10 results in France, one of them in 2016, his rookie season. But he isn’t the only one who clinched top-10 results in Pau: Ferdinand Habsburg (Carlin), Jehan Daruvala (Carlin), Guanyu Zhou (PREMA Theodore Racing) and Mick Schumacher (PREMA Theodore Racing) also succeeded in doing so.

In the pre-season tests, Mick Schumacher also displayed a very good form. On two of the six days of testing the German was the quickest. The Briton Daniel Ticktum (Motopark) also made it to the top of the time sheets on two days, with Spain’s Alex Palou (Hitech Bullfrog GP) and rookie Jüri Vips (Motopark) from Estonia setting a fastest lap time each on the other two days.

The season kick-off at Pau is particularly challenging for the 13 rookies on the grid. Pau is regarded as difficult street circuit where nearly every mistake results in a crash into the walls or crash barriers. One of the rookies who already gathered some Pau experience in another series is Sacha Fenestraz (Carlin). The Renault Junior is the only driver on the grid representing the French colours and would love to thrill his compatriots with great performances.

The Hitech Bullfrog GP squad also will be particularly motivated when travelling to the first race meeting of the season. Just short before the season kick-off they announced the new cooperation with Bullfrog GP. Bullfrog GP turned taking young talents to the very top of motor racing and providing for the perfect conditions on the way up into their credo.

Sacha Fenestraz (Carlin): “The fact that the season is kicked off in Pau represents a special challenge – not only but in particular for those who haven’t raced here before. I already contested two race meetings at Pau, one with Formula 4 and one with the Formula Renault 2.0. Nonetheless, one of the most important tasks will be to adapt to the circuit with the faster F3 car as fast as possible. While doing so it’s of major importance to not make contact with the walls or tyre walls. Even if you should have succeeded in getting away without major damage you won’t feel well or confident when you want to take your car to the limit at this place. It’s the only race weekend in France and my home race meeting but I will approach the weekend just as the other nine. I think anyway that I will have to learn a lot. After all, I contested just two F3 weekends to date.”