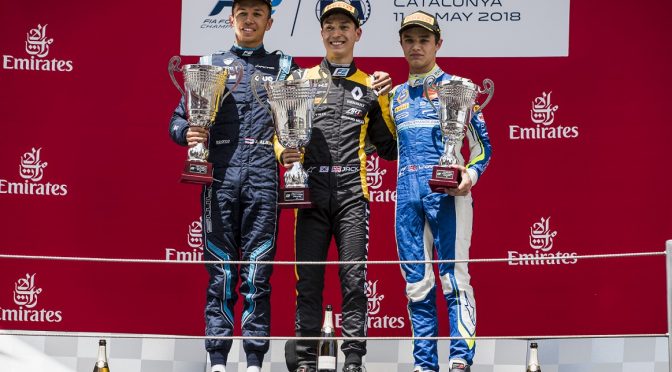 British driver masters difficult conditions to claim maiden win
Jack Aitken managed a flurry of virtual safety car periods to collect his first FIA Formula 2 Championship victory in the Sprint Race in Barcelona, Spain, assuming the lead at the start of the race and holding on to claim ART Grand Prix’s second win of the weekend, ahead of DAMS’ Alexander Albon and Carlin’s Lando Norris.
Although the circuit was damp following overnight rain and a short spell of drizzle in the morning, all driver started on medium-compound slicks as no further downpours were expected throughout. Polesitter Artem Markelov had a poor start, dropping down the order as Aitken darted to the front of the pack ahead of Sergio Sette Camara, clearing a wild first lap behind them as Nyck de Vries went wide at turn 4 before Roberto Merhi went sideways on the exit of the same corner.
Keeping his head cool, Aitken had found a 3.3s advantage over Sette Camara after the opening lap, the British driver setting the early quick laps before the first Virtual Safety Car period was introduced for de Vries’ stopped car, the PREMA driver spinning at turn 10 before coming to a halt. At the return of green flag running, Sette Camara went wide at the same corner to allow Albon and Norris through, while Aitken had managed the restart to perfection to assume a gap of 11.7s over the Thai driver.
A full safety car period emerged shortly after, as Japanese duo Tadasuke Makino and Nirei Fukuzumi tangled at turn 3 which eradicated Aitken’s lead as the two cars were cleared from the barrier. Aitken handled the restart adeptly, goading Albon into getting close before accelerating away to retain his lead, leaving the DAMS driver in the clutches of the chasing Norris.
Albon and Norris proceeded to draw nearer to Aitken after the ART driver briefly ran wide, while Luca Ghiotto nestled in behind the leading trio to pick up any pieces. Recomposing himself, Aitken hit back with a series of fastest laps to keep Albon out of DRS range, leaving Norris to occupy his mirrors. Behind them, Sette Camara had fallen some way behind and the Brazilian fell victim to Feature Race winner George Russell before subsequently pulling over at the side of the road with a mechanical issue – requiring a second VSC period to remove the lifeless Carlin.
Aitken increased his gap over Albon at the lap 15 restart, with Norris falling back dangerously close to Ghiotto. The Italian driver grabbed DRS on the following lap, but was too far back to seriously challenge for third place. Behind, Russell was hunting the pair down, bringing himself into DRS range of Ghiotto – delicately tucking his car down the inside of the Campos driver at the start of the 20th lap to claim fourth.
With Albon having his hands full trying to keep Norris away, Aitken was able to scamper up the road with a 2.8s lead before a third virtual safety car, called to clear the parked MP Motorsport car of Ralph Boschung after the Swiss driver sustained a heavy lock-up trying to pass Santino Ferrucci, puncturing his front-left tyre in the process. The race resumed with three laps left, Aitken surging ahead once more, but the Brit lost a full second to Albon on the penultimate lap. Dusting himself off, Aitken found time on his final lap to sweep home for his first F2 win, 1.5s clear of Albon in second.
Norris took third, some five seconds ahead of Russell who collected the fastest lap on the final tour of the circuit, while Ghiotto was further back. Sean Gelael produced an impressive overtaking display to grab sixth ahead of Antonio Fuoco. Nicholas Latifi fought tooth and nail with Markelov for the final point, even making contact in the penultimate corner, leaving the Canadian to hang on to eighth.