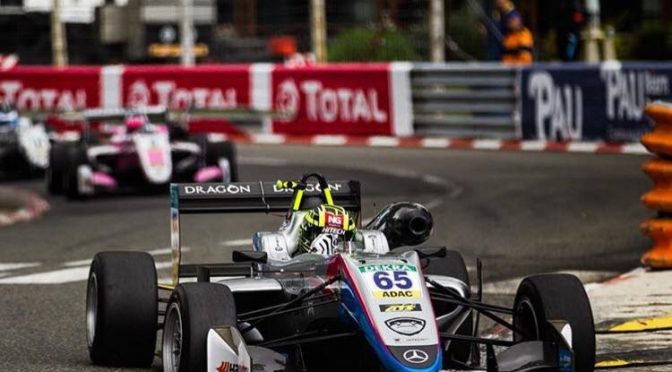 EA on the Go in Pau

F1Weekly friend, Enaam Ahmed – the runaway 2017 British F3 Champion – started his international motor racing career in grand style, hustling in the season opener of the 2018 FIA European F3 in the streets of Pau, and emerging in the top three of the championship after three races.

Pau, located in south of France by the Pyrenees mountains, has a rich racing heritage; names like Fangio and Clark have been victorious here. Montoya once lapped the entire field to win an F3000 race. Lewis Hamilton has seen success here also.

For the first of three races of the weekend Enaam posted the fifth fastest time in his group (B), his time on his maiden voyage on a street circuit was 1’10 “357, very impressive as pole position time, set by Daniel Ticktum, was 1’10” 013.

Guan Yu Zhou, now in his third year in the series, made history by becoming the first Chinese driver to win in European F3. Enaam was 6th in his Mercedes-powered Dallara. He was the second best placed driver, behind Kiwi Marcus Armstrong, among racers making their first appearance in Pau.

In qualifying for race 2, French driver, Sacha Fenestraz, who raced last year at Pau in the Formula Renault Euro Cup, took pole (1’23″620) after a close battle with Enaam; (1’23″623). The two went cockpit-to-cockpit at the start, going into turn 2 Enaam attempted to take the lead but ran out of real estate, and after a love tap from Hitech GP teammate, Spaniard Alex Palou, dropped to 6th at the end of the opening lap. Enaam soldiered on to claim a top 5 finish.

The third and final race of the weekend, the main event Pau Grand Prix started in wet conditions, with only Sacha Fenestraz on slicks. Enaam was on pole position but wheelspin when the lights went out allowed Estonian Ralf Aron to take the lead. On lap 8 Armstrong hit the barriers, so did the Austrian Ferdinand Habsburg, which brought out the safety car. The race was later red flagged, further increase in rainfall led to the race to be declared over. Thus, only half points were awarded.

The opening round of the season saw three different winners, and two rookies in the top three in the championship. Sacha Fenestraz leads (37 points), third year driver Aron is second (34.5 points) and Enaam is third (27 points).

Speaking to www.thecheckeredflag.co.uk Enaam said; “I am really delighted to have scored a podium finish already in my first weekend of racing in the FIA Formula 3 European championship. Here I am up against the world’s best Junior drivers and now I am bringing a pole position and a podium result home that is really great.”

Round 2 is on the first weekend of June at the Hungaroring.