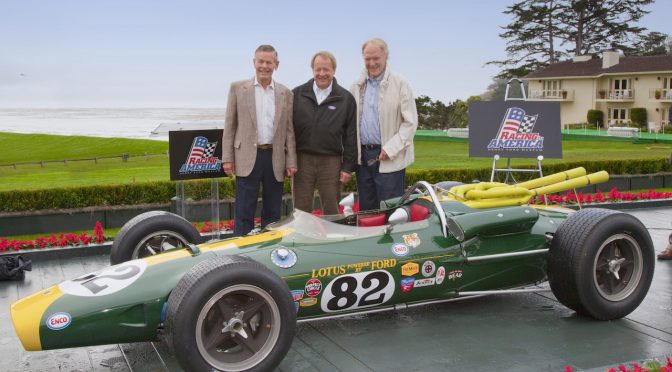 PEBBLE BEACH, Calif. (June 6, 2018) — It was the early 1960s. It was a time of change. And at the Brickyard—more formally the Indianapolis Motor Speedway—an outright revolution was underway.

The composition of a racecar was being totally re-envisioned, with the engine moving from front to rear.

Early in the decade, in 1961, Jack Brabham’s nimble new rear-engine Cooper made its way onto the track at the start of the 45th International 500-Mile Sweepstakes—and finished ninth, besting many of the more powerful front-engine competitors by virtue of its superior handling. Just two years later, Jimmy Clark piloted a Lotus, one of four rear-engine cars in the race, to second overall. And another rear-engine car placed second the following year. The writing was on the wall.

Old-school “roadsters” with their big, front-mounted Offenhauser engines still outnumbered rear-engine cars by nearly two to one in 1964, and a roadster driven by A. J. Foyt won. But that victory was short-lived. In truth, the roadster was done.

European Formula 1 expertise was about to radically change an American tradition.

Dan Gurney convinced Lotus Founder Colin Chapman to build an all-new rear-engine car for the 1965 race, and Ford Motor Company provided a powerful new 4-cam V-8. Fully 27 of the 33 cars that started this 500 were rear-engine designs. But the Lotus 38 created by Chapman, powered by Ford, and driven by Clark scored a convincing victory, recording what was then the highest-ever average speed (150.686 mph).

Bell bottoms and flower power were passing passions, but the rear-engine racecar was here to stay.

“At first, Indy traditionalists scoffed at these light and lithe new cars, but they proved to be significantly faster than the old roadsters, and once they could be reliably raced, it was obvious that the rear-engine configuration was the only way to go,” says Ken Gross, Pebble Beach Concours Selection Committee member and Chief Class Judge.

The Indianapolis Revolution will be celebrated with a special class on the competition field of the 2018 Pebble Beach Concours d’Elegance on August 26. Front-engine cars, including a freshly restored “laydown” roadster (with the engine on its side), will battle once again with a wonderful variety of of rear-engine cars, including the historic 1965 Indy winner.

The 2018 Concours will also feature Motor Cars of the Raj, Rollston Coachwork, Postwar Custom Citroën, Sporting Vintage Cars and Tucker—and organizers also promise another surprise (or two or three!) to be unveiled this summer. So I expect to meet  many F1Weekly supporters at this edition of the 2018 Pebble Beach concours d’Elegance.