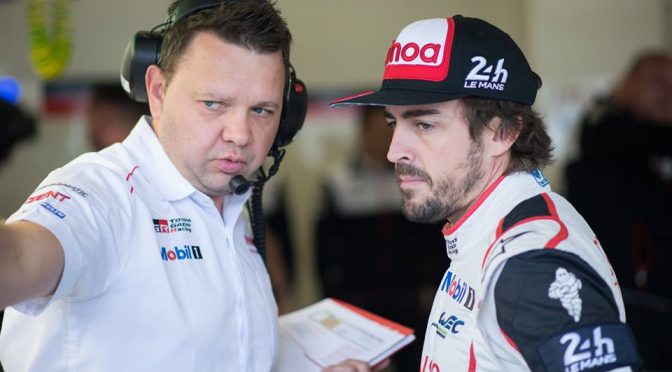 CLARK AND NASIR EXPLAIN WHY THE CANADIAN GRAND PRIX WAS EXCITING! WE HAVE A FRESH EPISODE OF TECH TALK WITH TIM AND OF COURSE A NICE MOTORSPORTS MONDIAL

In a heavily interrupted final qualifying session for this weekend’s 24 Hours of Le Mans, Kazuki Nakajima claimed pole position for the No.8 Toyota Gazoo Racing entry he will share with Fernando Alonso and Sébastien Buemi with a time of 3:15.377.

The Japanese driver was one of a few to make an improvement since yesterday, and he finished the second a full two seconds ahead of the sister TS050 HYBRID to make it a Toyota 1-2 on the starting grid for the second round of the WEC Super Season.

Kazuki Nakajima:  “I was more or less at the maximum on that lap, I had no traffic so I cannot complain too much.  It was much better than yesterday when I didn’t feel as good grip as today. The lap time was not as good as I expected but I have to be happy with it.  More importantly I had a really good balance for the race trim and we are ready for the race.”

The third session was extended by 30 minutes to balance a red-flag-shortened early evening qualifying and, although it started in the dry, rain began to fall over the track towards the chequered flag.

Rebellion Racing claimed third place with the No.1 Rebellion R13-Gibson of Bruno Senna (3:19.449).  Just four hundredths of a second behind the second Swiss car was the No.17 SMP Racing BR Engineering BR1-AER.  Thomas Laurent in the No.3 Rebellion actually set a faster time but was one of several drivers to have his times deleted for pit infringements.