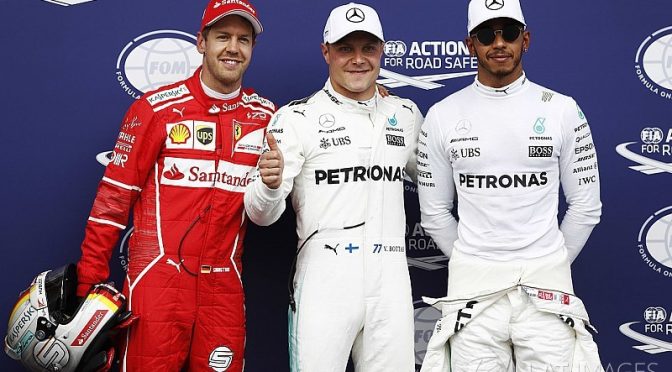 Bottas beat Lewis Hamilton to pole position at the Austrian Grand Prix by 0.019s as the Mercedes teammates went head to head in qualifying at the Red Bull Ring.

Sebastian Vettel took third on the grid, but was 0.334s off Bottas as the Mercedes proved to be the fastest car around the 4.3km circuit for the fifth year running. Vettel was actually the quickest driver through sector two, but the power of the upgraded Mercedes engine shone through in sectors one and two to deliver Bottas to pole.

Kimi Raikkonen took fourth place in the second Ferrari, but was a further two tenths off pole position compared to Vettel — all of which was lost in the final sector.

Bottas held a substantial advantage after the first runs in Q3 at the Red Bull Ring as title rivals Hamilton and Sebastian Vettel both made errors.

Bottas improved on his benchmark on his final lap as he clocked a time of 1:03.130 – a new track record at the venue.

Hamilton closed in to emerge as Bottas’ primary rival and finished just 0.019s shy of his team-mate, as Mercedes locked out the front row of the grid for the second successive event.

Kimi Raikkonen ensured an all-red second row as he took fourth, while Red Bull was never in contention for pole position, as an attempt for its drivers to tow each other backfired.

Max Verstappen was fifth, with Daniel Ricciardo seventh, as both expressed frustration over the radio regarding the tactics in Q3.

The pair were split by Haas’ Romain Grosjean, who showed strong pace throughout the session, as he seeks to end his 12-race spell without scoring a point.