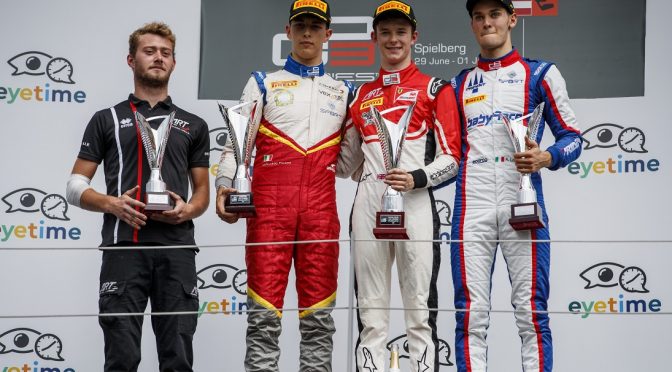 British driver untouchable in Saturday’s GP3 race in Austria
Callum Ilott cruised to a decisive GP3 Series victory in Race 1 at Spielberg, Austria, converting pole position into a lights-to-flag win. The ART Grand Prix driver crossed the line 4.5s ahead of Campos Racing’s Leonardo Pulcini, as Alessio Lorandi of Trident secured his best result of the season in third place.
Getting an ideal start to the race, Ilott surged ahead of the pack as Lorandi overtook front-row starter Jake Hughes to capture second place at the first corner. Pulcini quickly dispatched the British driver moments before a safety car was called for the stranded Joey Mawson, who had come to a stop at turn 1 – his race ending immediately.
Ilott comfortably kept the lead on the lap 4 restart, as Pulcini put Lorandi under heavy pressure. The Trident driver held his nerve during the initial onslaught, defending strongly as Hughes and Pedro Piquet began to join the fray. Lorandi found a little more breathing space over Pulcini on the following lap, but his Italian compatriot soon wrested control of second place and began to chase Ilott.
Meanwhile, Series leader Anthoine Hubert was working on a recovery drive from 19th on the grid, working his way past Simo Laaksonen to get into the top 10 – with teammate Nikita Mazepin in tow. Ilott continued to press on, opening the gap over Pulcini as Hughes began to put Lorandi under pressure to reclaim third – eventually blasting his way past at turn 5 shortly before the midpoint of the race.
Hughes was unable to shake Lorandi from his tail and, with Piquet and Ryan Tveter closing in, the battle intensified – Piquet attempted to pass his teammate into Turn 3, but had to abort his move and take to the run-off. Lorandi, sensing the urgency, repassed Hughes on the following lap and immediately set about building a gap to stave off the threat of being within DRS range.
After a problematic qualifying in yesterday’s session, Hubert endured further misfortune; having been clipped by Juan Manuel Correa on the back straight – the American trying to cover him off – the Frenchman was left with a broken front wing. Hubert cleared Correa and his Jenzer teammate David Beckmann, but the latter was able to retake eighth place on the following lap. As Hubert sought to defend, Mazepin attempted to snatch the inside line and ran out of room, sending the points leader into a spin.
At the front, Ilott had checked out, holding a lead of 2.5s over Pulcini ahead of the final five laps which continued to grow in the final stages. Lorandi – having passed Hughes – was given time to breathe before an assault from Piquet in the final stages. Having used his final DRS use to send Hughes into fifth, Piquet put Lorandi back under pressure for the final spot on the podium.
Having put the race win beyond all doubt, Ilott clinched his second victory in a row – and with it, the points lead – as Pulcini followed the Ferrari Academy driver home, albeit 4.5 seconds behind. Lorandi weathered the late storm from Piquet to claim his first podium of the year, as Hughes held on for fifth.
Giuliano Alesi passed Tveter on the final lap to snatch sixth, as Beckmann took eighth place after a thrilling scrap with Laaksonen for reverse-grid pole in tomorrow’s race – with Dorian Boccolacci rounding out the scorers.