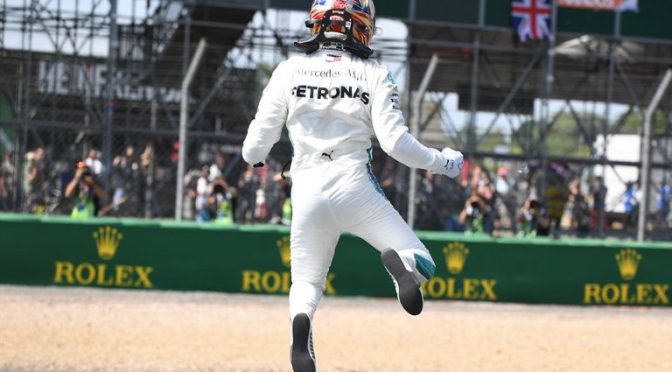 LCH put his Mercedes on pole position for the British Grand Prix with a fantastic final lap in qualifying.

Hamilton, bidding to move ahead of Jim Clark and Alain Prost with his sixth victory in Britain, and his fifth in succession in front of the partisan Silverstone crowd, trailed Vettel prior to the final runs.

But the 33-year-old Englishman delivered a breathless time with his final throw of the dice to see off the competition from both Ferrari cars and start Sunday’s race as the favourite to claim an historic win.

“I gave it everything I could,” said a breathless Hamilton moments after getting out of his car and sealing his 50th pole for Mercedes. Standing in front of the main stand, he added: “It was so close between the Ferraris. I was just praying I could do it for you guys. I am so grateful for the support and without you I wouldn’t have been able to do it.”

Vettel, who revealed he almost pulled out with a neck injury, added: “To be honest this morning I was not sure I could do qualifying. I am happy but I lost some time on the straight.