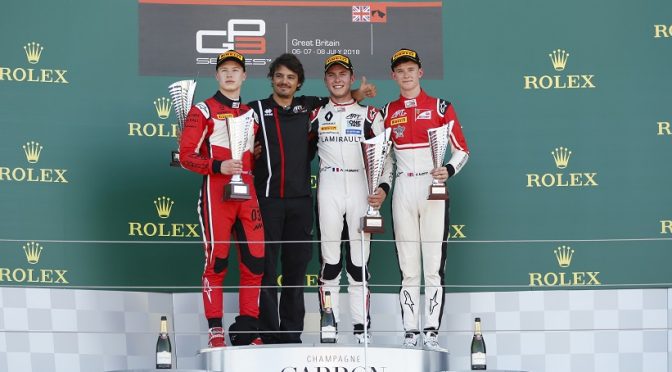 French driver takes victory in ART 1-2-3 result
Anthoine Hubert cruised to victory in an eventful GP3 Series Race 1 at Silverstone, Great Britain, shrugging off two virtual safety cars and a full safety car period to clinch his second win of the season. Hubert beat his ART Grand Prix teammate Nikita Mazepin by 3.9 seconds, as Callum Ilott completed a podium lockout for the French team.
Getting away from the line on the formation lap, Hubert suffered a slight scare having edged away from his grid slot slowly, but was able to reassume his position at the front of the grid. He kept the lead as the lights went out, keeping Mazepin at bay as Ilott thrust past a slow-starting Giuliano Alesi. Immediately, there was plenty of action at the first corner; Alessio Lorandi stalled, leaving the field to bunch up in avoidance. Juan Manuel Correa attempted to pass Julien Falchero around the outside of turn 1, but the Arden driver had nowhere to go and speared into the side of the American driver – leaving the two to retire.
A virtual safety car was brought out as the wreckage was cleared, with the race returning to full-speed running at the turn of lap 4 – Hubert leaving Mazepin in the clutches of Ilott. Shortly after, another VSC period was called after Tatiana Calderon and Gabriel Aubry made contact at Luffield, leaving Aubry’s car stranded with his suspension broken. The brief second VSC period came to an end, before the aftermath of the incident brought out a full safety car – Calderon came to a stop on the circuit just before Stowe, prompting a quick clearance of the Colombian’s car by the marshals.
Dropping the field at the lap 6 restart, Hubert quickly built a gap over Mazepin – setting a new fastest lap and continuing to dictate the pace over the subsequent tours of the circuit. This gave Ilott a chance to attack Mazepin, while their ART teammate Jake Hughes was working hard to wrestle eighth from the grasp of Joey Mawson.