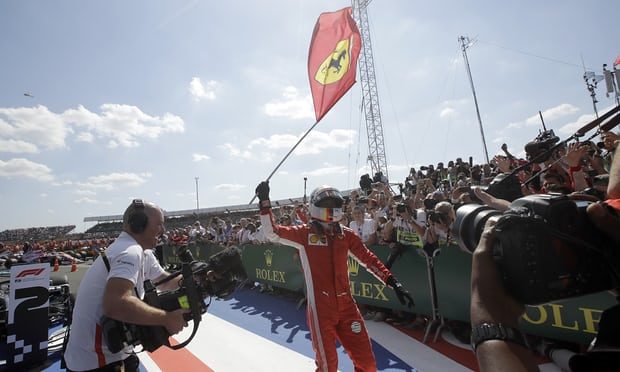 “Interesting tactics I would say, from this side,” he adds, avoiding all potential eye contact with Ferrari. For Vettel and Ferrari, that is surely as sweet a victory as it gets, preventing Hamilton, who started on pole, a record-breaking sixth win on home soil round Silverstone. It’s never dull.

“It was my mistake, so that’s fine,” Raikkonen says of that 10-second penalty. “I deserved it but kept fighting.” Hamilton steps on the scales, in a bit of a huff. A man of few words at the moment, as the Ferraris enter the cool-down room. Vettel shakes Hamilton’s hand but there’s an elephant in the room – that clash at Turn 3. Conversation is in short supply.

“We live to fight another day,” is the message from Mercedes to Hamilton, who had an exhilarating race. As for Vettel, he crashes into his baying Ferrari colleagues at parc ferme. He’s, obviously, absolutely ecstatic. “The safety car spiced it up,” Vettel says. “It was not so easy to find a way through but I think I surprised Valtteri. I’m really, really happy.” That’s his first win at the British Grand Prix since 2009 – and it means so much to him.