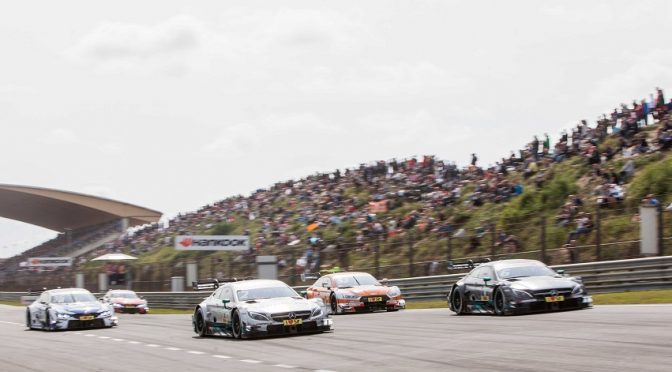 DTM AT ZANDVOORT: MAXIMUM ACTION AT THE SEA!

DTM makes its stop at the sea. This weekend (13th to 15th July), the Circuit Zandvoort stages the fifth of the 10 race meetings on the 2018 DTM calendar. The race weekend at the Dutch North Sea coast means summer, sun and race action. But that’s not the only reason why Zandvoort is so popular with all the 18 drivers. The drivers representing the Audi, BMW and Mercedes-AMG camps all look forward to racing at the arguably most demanding racetrack in the season. The unique dune circuit provides an exciting mix of fast and slow sections – and those who hope for asphalted run-off areas will be disappointed. This means that every mistake will have severe consequences and often even can mean the end of your race.

The circuit at the Dutch seaside town provides a special atmosphere. And it has got a special feature: sand! All the time, the finest grains of sand are blown on the track from behind the grandstand. Particularly in the morning, for instance during the practice sessions, the 4.307-kilometre circuit is covered by a fine film of sand that only disappears over the course of the morning sessions. And the more sand on the track, the more the DTM cars will slide around and the higher the tyre wear as the tyre tread is subjected to an even higher load, resulting in higher temperatures.

Five-way battle at the front end of the leader board
After the races at the Norisring, the battle for the lead is far closer than it was before and while just two drivers fought for the lead prior to the Norisring, the fight for the top position on the leader board turned into a five-way battle. Marco Wittmann, Edoardo Mortara and Paul Di Resta joined Timo Glock and Gary Paffett in the fight for the championship. The biggest winners in the seventh and eighth rounds of the season were Wittmann (BMW) and Mercedes-AMG driver Mortara. Local hero Wittmann finished third on Saturday and on Sunday, he finally secured his first DTM home win, thus scoring a total of 41 points. With 92 points on his tally, the two-time DTM Champion now holds third position in the championship and is tied for points with fellow BMW driver Timo Glock. “Zandvoort is one of my favourite circuits,” Wittmann says. “There is nearly no other circuit I have been as successful at as I was there. I secured several poles and race wins at Zandvoort and look forward to racing there again to the max. And of course the Norisring weekend boosted my confidence. I was away on vacation for a week and now my batteries are fully recharged.”

With impressive 46 of 56 possible points scored at the Norisring, Mortara leaped to second position in the championship. With 93 points on his tally, his gap to the championship leader, fellow Mercedes-AMG driver Gary Paffett, amounts to just six points. Of the drivers still racing in DTM, Paffett is the most successful driver at Zandvoort. He won there in 2005, 2009 and 2010 and says: “Zandvoort is my favourite DTM circuit. It’s a great venue and a really demanding circuit where racing is big fun.” Prior to the Zandvoort weekend, Mercedes-AMG holds the lead in the drivers’, constructors’ and team championships.