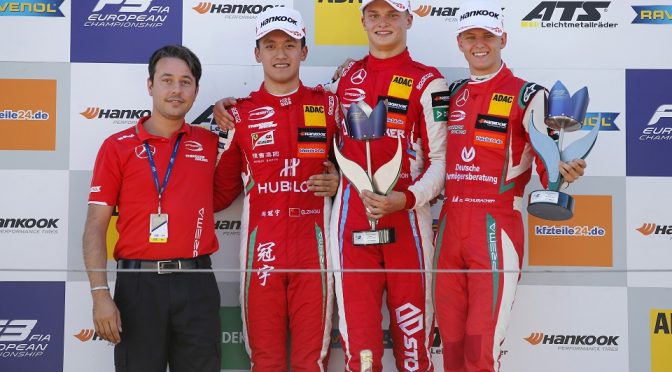 Ralf Aron came out in front in the dash towards the first corner, having demoted pole-sitter Guanyu Zhou to second right after the start. Behind the two, Mick Schumacher slotted into third place from Marcus Armstrong and Daniel Ticktum. In the opening stages, Zhou attempted to put the leader under pressure, but also had to keep an eye on Schumacher behind him. However, the order remained unchanged throughout the race.

Towards the end of the race, Armstrong closed up to Schumacher and tried to put the German under pressure. However, the New Zealander with Italian licence turned out to be unable to mount a successful challenge. Thus, Schumacher scored his second podium finish in the 2018 FIA Formula 3 European Championship. Ahead of him, Aron and Zhou came first and second while Armstrong finished behind the German to complete the clean sweep of the top four for Prema drivers.

Ralf Aron (PREMA Theodore Racing): “My starts have always been quite good and here, I had a good getaway as well. In the first corner, I was on the inside and I was able to take the lead. On the fifth or sixth lap, I had a bit of a moment when I almost lost the car because there was gravel and sand on the track due to an excursion by another driver. Then, Guanyu was able to attack me, but I kept the lead.”

Guanyu Zhou (PREMA Theodore Racing): “At the start, Ralf was better and he also was on the more favourable inside of the first corner. Then, I tried to stay closely behind him to be able to benefit in case he had made a mistake. I am quite happy with my race, although I should still work on improving my starts for the next races.”

Mick Schumacher (PREMA Theodore Racing): “It is quite easy to sum up my race: I was third at the start and stayed there until the end of the race. At the end, I was having problems with the clutch and I am happy to have made it to the finish in the first place.”