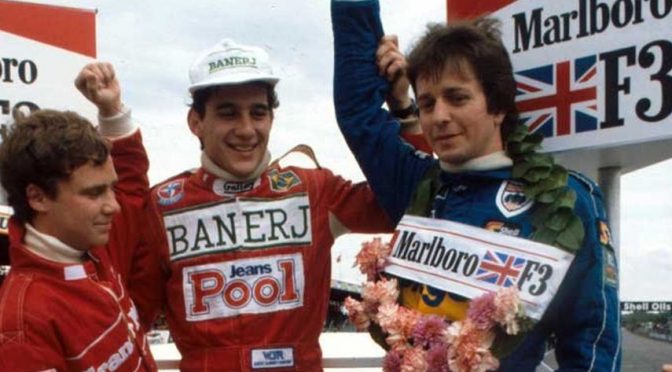 CLARK SITS DOWN AND HAS TO LISTEN TO NASIR’S WONDERFUL STORIES ABOUT HIS VACATION TO GOODWOOD AND ZANDVOORT AND HOW MUCH FUN HE HAD WHILST THE HOST STAYS HOME HOLDING UP THE F1W PALATIAL STUDIOS.

WE HAVE A NICE GOODY BAG AND, WE ARE PLEASED TO BRING YOU A GREAT INTERVIEW FROM GOODWOOD FOS WITH MARTIN BRUNDLE…

Brundle had an unorthodox route to Formula One. He began his racing career at the age of 12, competing in grass track racing, in the Norfolk village of Pott Row.In 1975, he moved to Hot Rod racing and received ‘Star grade’ status. In 1979, he started single seater racing in Formula Ford. During this time he also raced Tom Walkinshaw’s BMW touring cars, during which he finished second against a field of international drivers at Snetterton.

He won the BMW championship in 1980, and partnered Stirling Moss in the TWR-run BP/Audi team during the 1981 British Saloon Car Championship season. In 1982, he moved up to Formula Three achieving five pole positions and two wins in his debut season. He won the Grovewood Award as the most promising Commonwealth driver.

The next year, he competed with Ayrton Senna for the Formula Three championship, which Brundle eventually lost on the final laps of the last race. In 1984, he was offered a Formula One entry.