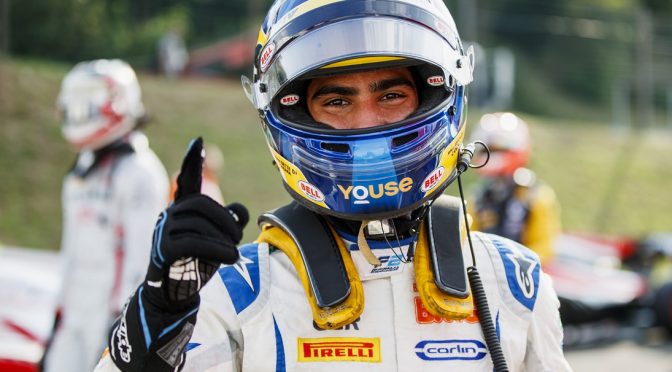 Carlin ace grabs fastest time in final minutes of session
Sergio Sette Camara surged to top spot in the FIA Formula 2 Championship Qualifying session in Budapest, Hungary, grabbing a 1:27.400 time with two minutes left on the clock, ensuring the Carlin driver claimed his first F2 pole position. Jack Aitken had to be content with second place, and the ART Grand Prix driver watched Sette Camara surpass his best effort from the pitwall as Nyck de Vries of PERTAMINA PREMA Theodore Racing secured third.
Despite the threat of rain emerging an hour before qualifying in the shape of looming, grey clouds, the sun broke through to guarantee a dry session. Aitken hit the road first, leading out teammate George Russell and Trident’s Arjun Maini before setting the first timed lap of the session. Although Antonio Fuoco’s (Charouz Racing System) warmup lap was marginally faster than Aitken’s, the British driver was immediately on the pace on his first quick run, punching in a 1:27.704 lap as Russell fell short by just 0.06s.
With traffic a factor and clear track at a premium, there was very little change in order prior to the mid-session tyre switch phase, and Aitken’s overtures to improve his best time were met with a lock-up into the first corner, while quick first sectors from Russell and Maini were wasted by the limited space available for the drivers.
As the majority of the field pitted prior to the midway point of the session to prepare for their second round of runs, de Vries led a quintet of drivers who used the lull in running to exploit a traffic-free circuit. The Dutchman then snatched control of the session, going just under a tenth quicker than Aitken on his first flying run to head the timesheets.
Seeking retribution, Aitken returned to the circuit on fresh tyres and immediately set about overturning de Vries’ advantage. Stating his intentions with a session-best first sector, Aitken hacked two tenths out of the PREMA driver’s headline time, returning to the top of the timesheets. The British driver bravely called his session a day afterwards, electing to watch the final five minutes from the pitwall.
Aitken’s time initially stood firm, seeing off attempts from Russell and de Vries, before Sette Camara dived below the benchmark by six-hundredths of a second – courtesy of a purple final sector – to clinch his first ever pole position in F2.
Aitken joins the Brazilian on the front row for tomorrow’s Feature Race, as de Vries leads the second row alongside championship leader Russell. Luca Ghiotto (Campos Vexatec Racing) beat Lando Norris (Carlin) to fifth, with RUSSIAN TIME’s Artem Markelov taking seventh on Saturday’s grid – just 0.001s faster than Maini. Ralph Boschung (MP Motorsport) and Louis Delétraz (Charouz) completed the top half of the field.