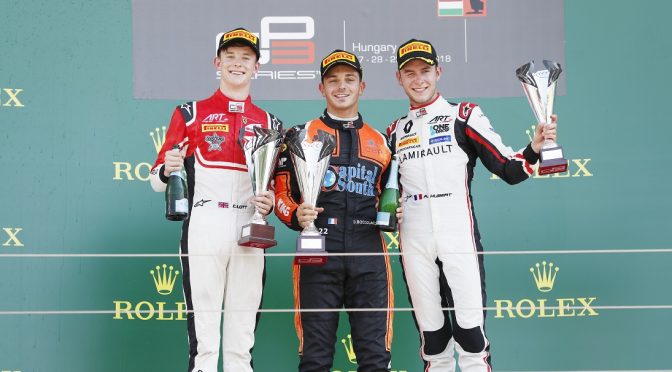 French driver claims victory from reverse-grid pole
Dorian Boccolacci clinched victory in the GP3 Series Race 2 at Budapest, Hungary through a well-managed race from reverse-grid pole. The MP Motorsport driver beat nearest rival Callum Ilott by 2.3s at the line, as the ART Grand Prix driver closed the championship lead to teammate Anthoine Hubert to 15 points. Hubert completed the top three to claim consecutive third place finishes.
In hot, sunny conditions – the air temperature approaching 30 degrees C – Boccolacci got off the line well, albeit accosted by fellow front-row starter Juan Manuel Correa, who hustled the Frenchman on the run to the first corner. Boccolacci came out of the fight best, avoiding trouble and managing to get away while Correa became embroiled in a skirmish with the ARTs of Ilott and Hubert, dropping to fourth.
Behind the front-running pack Pulcini had leaped up to fifth, but was under pressure from the chasing Trident duo of David Beckmann and Ryan Tveter. Correa looked to make amends for his start and began to chase after Hubert, but was unable to capitalise on his pace and eventually let the French driver go.
Boccolacci had started to exert his control over the race, quickly finding a strong advantage over Ilott to break free of the chasing pack – setting fastest laps to flex his muscles out in front. By lap 6, he had a 4.6s lead, and this continued to grow in the opening half of the race. Hubert was also free of Correa’s presence, and the American began to fall back into the clutches of Pulcini – with Beckmann and Tveter closely following to pick up any pieces.
Pulcini found his way past Correa with little problem, leaving Beckmann to front the assault on the Jenzer Motorsport driver. However, Correa proved strong in defence, blocking the German’s advances with DRS to hold on to fifth position. Beckmann’s sternest challenge came on lap 9, but could only bump his front wing against Correa as he was unable to make a breakthrough.
After the midway point of the race, Boccolacci’s tyres were starting to grain, and the Frenchman had to dip into his advantage to undertake some tyre management. Keeping the gap to Ilott as static as possible, the British driver slowly began to eat into the MP driver’s buffer – but didn’t seem to have the pace to challenge for the lead. By the penultimate lap, Boccolacci’s lead had fallen to 3.8s, but nonetheless seemed to have everything under control. Meanwhile, the battle between Correa and the two Trident drivers continued, and Tveter launched a fantastic move on Beckmann around the outside of turn 1 as he looked to challenge his compatriot.
On the final tour, Ilott had taken a further second-and-a-half out of the lead, but Boccolacci was too far up the road and clinched an emphatic victory over the British driver. Hubert completed the podium, almost seven seconds clear of fourth-placed Pulcini. Correa held on from Tveter to clinch fifth place, as Beckmann was a further second behind despite his earlier progress. Tatiana Calderon completed the scorers, clinching her first point of the season.