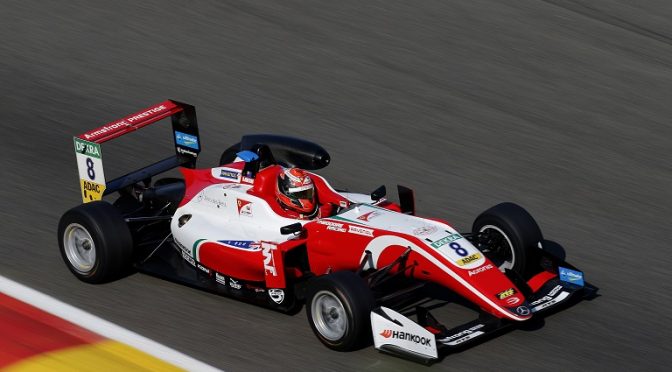 CLARK AND NASIR SHARE THEIR THOUGHTS ON VETTEL LOOSING THE GERMAN GRAND PRIX GIVING LCH THE POINTS LEADER IN THE CHAMPIONSHIP, WE HAVE THIS WEEKS GOODY BAG AND AN OUTSTANDING INTERVIEW WITH HALF TIME FORMULA 3 EUROPEAN CHAMPION MARCUS ARMSTRONG!

Five of the 10 race meetings of the 2018 FIA F3 European Championship season are history and consequently, the hopeful young guns already contested 15 races. Rookie Marcus Armstrong (PREMA Theodore Racing), a Kiwi racing with an Italian license and member of the Ferrari Driver Academy, secured the unofficial half-time title. Nonetheless, there still is a long way to go to the title for the 18-year old as the FIA Formula 3 European Championship grid is better balanced than ever. Just one point behind Armstrong, Briton Daniel Ticktum (Motopark) follows in second position, 11.5 points ahead of third-placed Ralf Aron (PREMA Theodore Racing).

To date, Marcus Armstrong didn’t impress with spectacular manoeuvres but by scoring consistently. With seven podiums, the Kiwi participated in more presentation ceremonies than any other driver on the grid. Furthermore, he secured at least one podium in every race meeting and at the Norisring he even clinched the full set of trophies. And with two pole positions he demonstrated that he also is among the fastest when it comes to delivering on a flying lap.

Meanwhile, Daniel Ticktum already secured five poles, thus holding the lead in this ranking. With three race wins, he also is the best in this area – but is tied for the lead with Ralf Aron. Particularly impressive was the Red Bull Junior’s win in the third round of the Norisring meeting, just a few hours after his starting crash with Ameya Vaidyanathan (Carlin).

Currently, the gap between the championship leader and the 10th-placed driver amounts to 62 points. Nothing you can rest on in consideration of the fact that a total of 75 points can be scored on every race weekend. Only two drivers of the top 10 – Robert Shvartzman (PREMA Theodore Racing) and Alex Palou (Hitech Bullfrog GP) still are waiting for their first win but both came close to realising this goal by finishing second.

The fact that the racing in this year’s FIA 3 European Championship is extremely close also is demonstrated by the fact that no driver was able to defend his championship lead for a long time, to date. Seven times – virtually after every second race, another driver made it to the very top on the leaderboard. Altogether, six drivers racing for four different teams were involved in this chase. The first leader of the season was Guanyu Zhou (PREMA Theodore Racing) after race one but in the next race, rookie Sacha Fenestraz (Carlin) stole his lead. And Fenestraz was followed by Ticktum, the two rookies Enaam Ahmed (Hitech Bullfrog GP) and Armstrong as well as Aron.

The summer break won’t be long for the young drivers and teams competing in the FIA Formula 3 European Championship season. The second half of the season will be kicked off at Silverstone, the British F1 circuit, as early as in mid-August. Afterwards, the season will be continued at Misano, the Nürburgring and Spielberg before Hockenheim will stage the season finale, where the new FIA Formula 3 European Champion and successor of Lando Norris will be crowned.