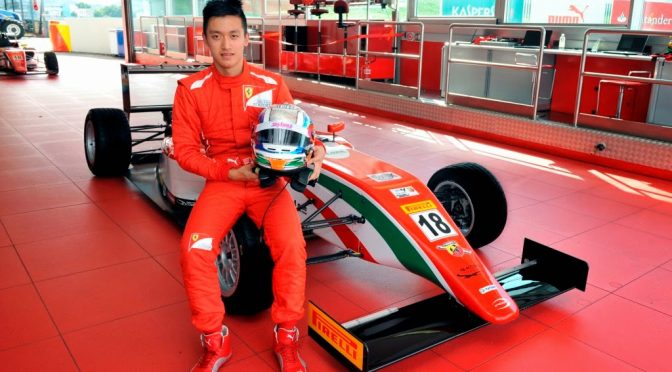 CLARK AND NASIR REACT TO THE BIG RICCIARDO NEWS, WE FINALLY COVER THE HUNGARIAN GRAND PRIX AND VETTLE LOST ANOTHER ONE! THIS WEEKS SPECIAL INTERVIEW IS WITH FIA EUROPEAN F3 CHAMPIONSHIP DRIVER GUAN YU ZHOU…

Born in Shanghai on 30th May 1999, Guan Yu Zhou began karting at the age of eight. In 2008, he won 8 races and was crowned “Best Young Driver.” In 2012, he moved from China to London to study, while continuing to race karts, joining Team Strawberry Racing, taking some important wins in the Rotax championships. In 2013, Guan Yu took the title in the European Junior Rotax and ABKC S1 Rotax Junior series, as well as finishing third in the final of the Euro Max Challenge in France.

In 2014, he joined Maranello’s Ferrari Driver Academy and raced for the Strawberry Racing Team in the Rotax Max Euro Challenge and in the CIK-FIA European Championship KF. In 2015, the Chinese youngster raced in the Italian Formula 4 series with the Prema team and the following year he joined the Motopark team, racing in the European Formula 3 series. In 2017, he came eighth, with five podium finishes with Prema, for whom he continues to race in 2018.